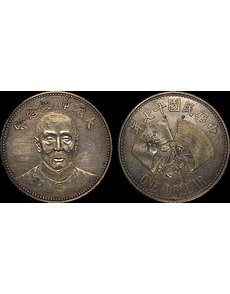 A rare 1928 silver pattern dollar of Manchurian warlord Chang Tso Lin stars in the Dec. 1 auction from Champion Hong Kong Auctions. The coin is notable for the borders created from stars that appear on both sides of the coin.

One of the rarest of Chinese coins, a 1928 silver dollar pattern of Manchurian warlord Chang Tso Lin, highlights a Dec. 1 auction.

The auction is being conducted by Champion Hong Kong Auctions, one of three auctions in conjunction with the inaugural Hong Kong Invitational Numismatic Convention.

The coin, which was struck shortly before the generalissimo was assassinated by the Japanese, is “the last in a series of three silver dollar pattern coins produced in 1926-28” depicting the leader.

The coins are believed to have been struck at the Tientsin (Tianjin) Mint. What is notable on this example is the border created from stars on each side of the coin. “Such fine work requires great skill, indicating that this coin is the product of a first class mint.”

A similar border was employed on a version struck in gold, but the other silver patterns lack the stars.

The pattern is one of 500 lots offered in the Dec. 1 auction.

All lots are subject to an 18 percent buyer’s fee.