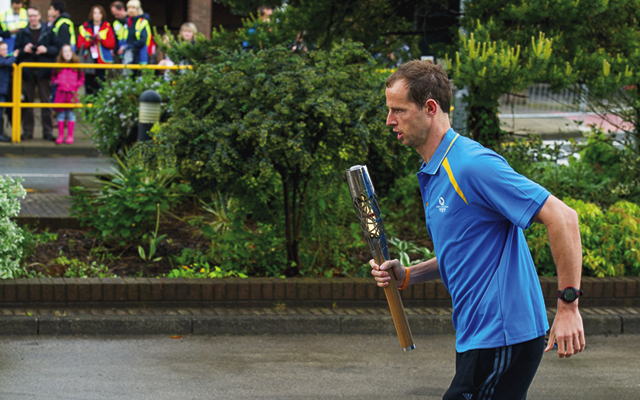 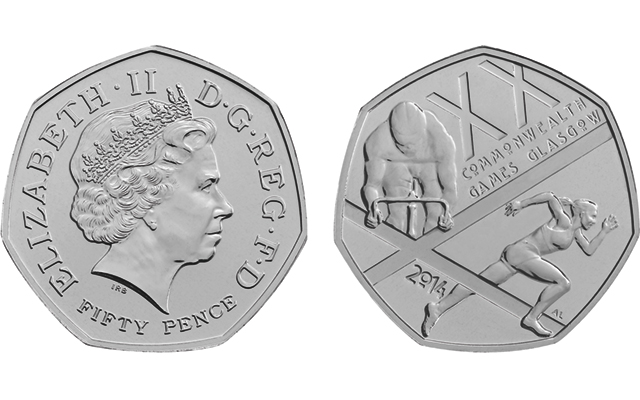 This Brilliant Uncirculated copper-nickel example of the 2014 Commonwealth Games 50-pence coin was made for collector sets. 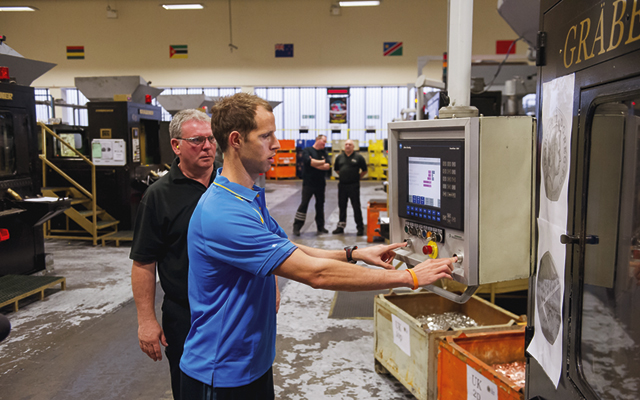 The United Kingdom is hosting an international sporting event in 2014, and the global relay made a stop at the Royal Mint’s Llantrisant, Wales, production facility.

On May 25 champion hurdler Rhys Williams carried the baton through the Royal Mint’s coin production unit, pausing along the way to strike the first Glasgow 2014 Commonwealth Games 50-penny coin.

Thousands of athletes will participate in 17 sports during this year’s 20th Commonwealth Games, scheduled for 11 days in the city of Glasgow.

A total of 5 million circulating commemorative 50-penny coins are being issued for the occasion, following the release in late 2013 of precious metal and Proof base metal versions of the design.

A team of baton bearers representing the Royal Mint during the relay included product marketing manager Kerry Willecome, who was part of the team who developed the commemorative coin packaging.

Designers Alex Loudon and Dan Flashman took two of the most iconic sports, athletics and cycling, and added the Saltire of Scotland and lettering inspired by Charles Rennie Mackintosh to create the design for the coin.

The Commonwealth Games will be the largest multisport event Scotland has ever hosted, according to the Royal Mint.

For more information about the Commonwealth Games silver and gold 50-pence coins, as well as the annual Proof and Uncirculated sets containing various versions of the coin, visit this Royal Mint website.