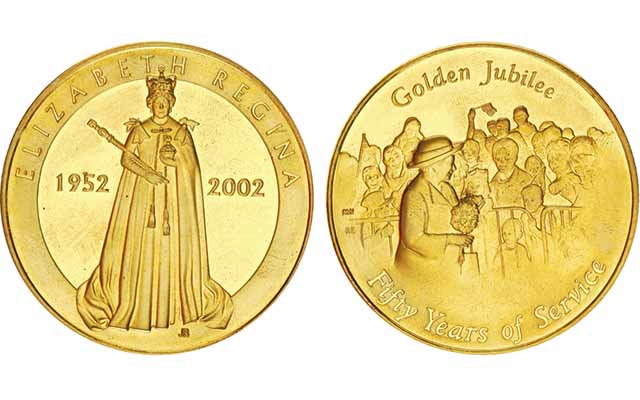 In 2002, the Royal Mint issued a Golden Jubilee medal for Queen Elizabeth II.

My mother recently gave me this medal from 2002 for Queen Elizabeth II’s Golden Jubilee. It comes in a red clamshell case. What can you tell me about this? Are medals for royal anniversaries common? Does the Royal Mint always issue medals for royal occasions?

The timing of this question couldn’t be more appropriate, as Queen Elizabeth II is set to become the longest-reigning monarch in British history on Sept. 9, surpassing the record set by her great-great-grandmother Queen Victoria.

The Royal Mint has a long tradition of issuing medals for royal occasions, including accessions to the throne and anniversaries (it also often issues coins, as well, for these events).

The Royal Mint in 2002 issued a Golden Jubilee commemorative medal, featuring a formal portrait by James Butler on the obverse. The queen is dressed in ceremonial robes while bearing the orb and scepter. Michael Noakes designed the reverse, which shows the queen performing a “royal walkabout,” greeting people crowded to see her.

Both designs were approved by the Royal Mint Advisory Committee, which for much of the queen’s reign was chaired by her husband, Prince Philip.

Three versions of the medal were issued: A rare Proof .9167 fine gold example, limited to a mintage of 250 pieces, retailed for £475 each. A Proof .925 fine silver version had a mintage limit of 2,002 pieces, each retailing for £29.95. A third version was minted in nickel-brass.

The example the reader now owns is of the nickel brass version. These had no issue limit and retailed for £4.50.

However, Royal Mint publicity information provided by Michael Sedgwick shows these in a presentation card package, so it’s possible that a dealer or firm in the secondary market repackaged them in the clamshell case that the reader received.

This summer, a dealer in Great Britain offered a new example of this nickel-brass medal in the colorful card for a price of £5.