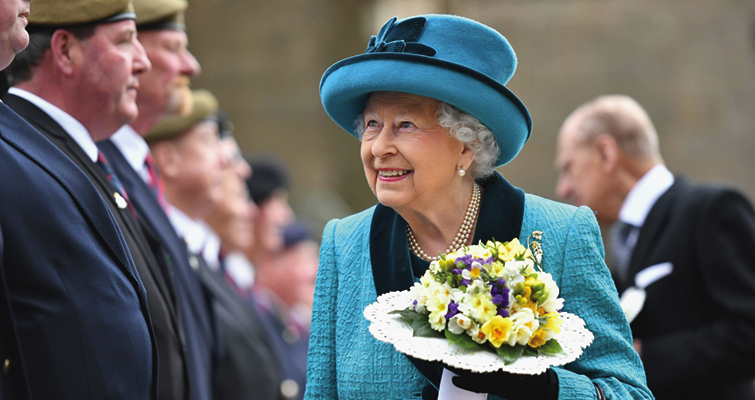 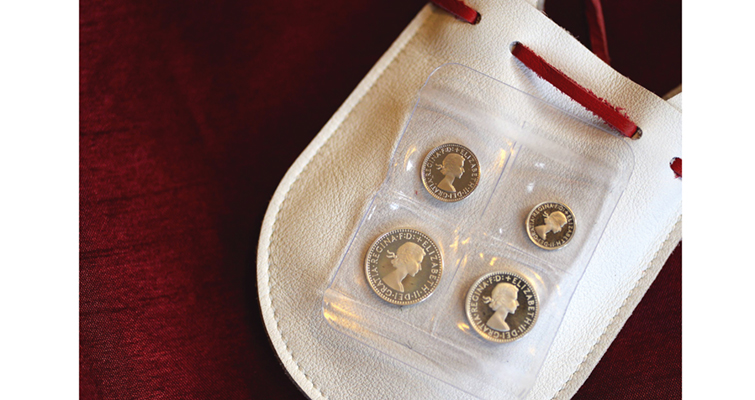 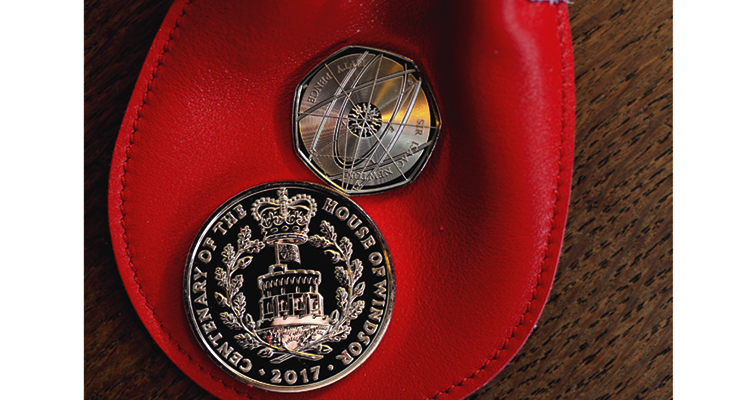 The Maundy distribution, in lieu of food and clothing, included a £5 coin commemorating the 100th anniversary of the House of Windsor and the 50-penny piece celebrating the genius of Isaac Newton, who was a Master of the Mint from 1699 to 1727. 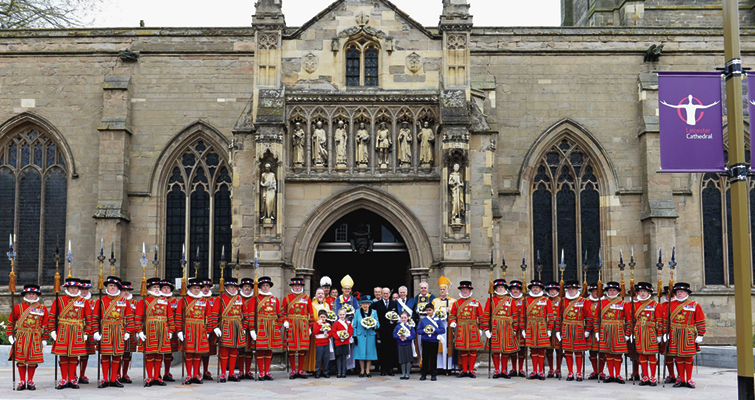 Queen Elizabeth II and Prince Phillip with the clergy and the Maundy Children. They are flanked by the Queen’s Body Guard of the Yeoman of the Guard, the oldest British military corps still in existence. It was created by Henry VII in 1485 at the Battle of Bosworth in the County of Leicestershire. 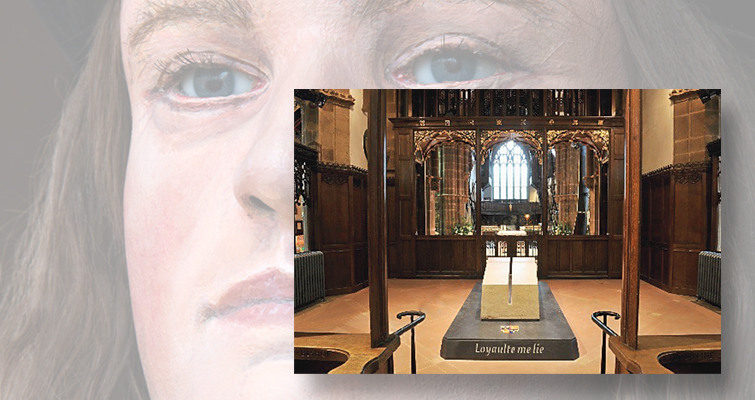 Richard III was reinterred in Leicester Cathedral in March 2015 and this is his tomb. But how did his remains wind up buried in a Leicester car park? After he was killed at the Battle of Market Bosworth in 1485, he was taken the 10 miles or so to Leicester and buried by the Grey Friars, a Franciscan Holy order, in their friary church. The friary church is long since gone, but researchers determined it was located at what is now the north end of a city council car park at Greyfriars, near the offices of the city’s Social Services Department. In August 2012 a careful excavation of the car park began. The archaeologists not only located the foundations of the old Greyfriars Church, but also discovered a skeleton with battle wounds and a curved spine. The remains were subjected to formal identification at Leicester University using DNA sampling and carbon dating. In February 2013 the university confirmed the skeleton was indeed that of Richard III.
Previous
Next

The City of Leicester (pronounced Lest-ah as rhyming with “jester”) has been on a roller-coaster of late.

In March 2012 Queen Elizabeth and Prince Phillip started their tour of the United Kingdom to mark her Diamond Jubilee in this East Midland’s city, accompanied by the Duchess of Cambridge.

A few months later the remains of King Richard III (1483 to 1485) were discovered under a Leicester car park. His skeleton was reburied with due ceremony in the city’s cathedral in 2015. Last May Leicester City Football Club (also known as the Foxes) won the Premier League against odds of 5,000–1 at the start of the season. The club had been relegated out of the second division in 2008, but returned to the Premier League in 2014. The club’s elevation to the top of the league was described as a “fairytale” and the “most unlikely triumph in the history of sport.” Leicester was one big party.

Leicester Cathedral was chosen for this year’s Maundy Service as it was the only Anglican Cathedral at which the ceremony had not taken place.

For centuries the venue was London’s Whitehall. However, from 1890, by order of Queen Victoria, the location was changed to Westminster Abbey, though in the years that the abbey was being prepared for a coronation, St. Paul’s Cathedral was used instead. The first Maundy Service of the current queen’s reign was April 10, 1952, where she distributed coins bearing the effigy of her late father (George VI had died on Feb. 6, 1952). This was held at Westminster Abbey and was the first public engagement of her reign. She received the news of her father’s demise when she was at Treetops, the Kenyan game lodge located in several trees overlooking a watering hole and salt lick.

She climbed a tree a princess and descended a queen.

In 1953 the venue was St. Paul’s, while the following year it was Westminster Abbey. Then, in 1955, Queen Elizabeth decided to alternate the service between the abbey and another major place of worship, in this case Southwark on the south bank of the Thames near London Bridge. A further change was made in 1971 when it was decided to hold the service at a different venue each year, but returning to Westminster periodically — generally once each decade.

The ceremony’s name had its origins in an event nearly 2,000 years ago.

The word “maundy” is derived from the Latin “Mandatum” meaning “commandment.”

Immediately after the Last Supper, Jesus washed the feet of his disciples. As recorded in John 13:15 he said to them, “I have set you an example: you are to do as I have done for you.”

Afterwards he delivered his new commandment, “Love one another; as I have loved you, you are to love one another” (John 13:34). This act of humility performed by Jesus is still recalled regularly by churches in many lands.

In England, the Maundy Service can be traced back to the fifth century A.D.

The pedilavium — or washing of the feet — followed Holy Communion on the Thursday before Easter. St. Augustine referred to this ceremony circa 600 A.D. In certain English monasteries prior to 1066 the pedilavium was performed daily. The earliest known English Maundy ceremony at which the monarch distributed money was in 1210. King John of Magna Carta and Robin Hood fame presented 13 silver pennies to each of 13 paupers at Knaresborough in Yorkshire on the Thursday before Good Friday. Why 13 and not a dozen recipients, and why 13 pence? It is quite possible that the number is symbolic of the 12 disciples and Jesus Christ. The recipients also received clothes, a belt and a knife. Additionally the king laid on a feast to feed 1,000 people.

In the penultimate year of his reign, Edward II (1307 to 1327) was the first to perform the pedilavium. Edward III (1327 to 1377) continued this tradition but also started others, such as linking the monetary distribution to the number of pence to the monarch’s age and giving gifts of food and clothing.

In 1698, William III was the last sovereign to perform the pedilavium.

For the following 233 years, the British monarchy had no direct involvement with the ceremony, it being performed by officials of the Royal Almonry, a small office within the Royal Household.

Changes were made over the years, with already-made clothes being replaced by cloth and eventually by a cash sum. Instead of the recipients being the same sex of the monarch, an equal number of men and women were recipients, their number being dictated by the sovereign’s age. Because many of the recipients sold the food for trifling sums, this too was replaced by money.

Back to a royal custom

In 1932 George V, the queen’s grandfather, restored the custom of the monarchy’s participation in the service. Princess Elizabeth, aged 8, watched her grandfather distribute the Royal Maundy in 1935.

Since she became queen in 1952, she has participated in 61 Royal Maundy services. On the first occasion she was still in mourning for her father, so wore black, with the Vanguard Rose Brooch in diamonds (given to her by the shipbuilder John Brown when she launched HMS Vanguard in 1944) on the lapel of her coat. At this year’s ceremony she wore a teal-colored (a sophisticated version of turquoise) suit and hat together with the Botswana Sorghum Brooch given to her by the president of Botswana in 2007. It is made of gold with 11 pear-shape diamonds. Sorghum is millet, a major crop for Botswana.

There are four denominations in the Maundy money — penny, twopence, threepence and fourpence pieces — so the 2017 silver pence gift was nine sets and an odd penny.

The Maundy money is presented to each recipient in a white leather purse with red drawstrings. Each coin is in a small Perspex envelope.

A second purse, in red leather with white drawstrings, contains coins totalling £5 and 50 pence. The figure comprises £3 in lieu of clothing, £1 instead of an outfit from the monarch’s personal wardrobe presented to one individual, and £1.50 in lieu of food.

The payment was made with a £5 coin commemorating the 100th anniversary of the House of Windsor (in 1917 George changed the Royal Family’s surname from Saxe-Coburg-Gotha to Windsor) and a 50-penny piece celebrating the genius of Sir Isaac Newton.

Clergy within the diocese make recommendations to the bishop, who makes final selections on behalf of the queen. The individuals must be 65 years or more. Recipients are notified by letter from the Royal Almonry Office at Buckingham Palace about 10 weeks before the ceremony. They are asked to complete a form that includes nominating a companion who can look after them on the day.

Clifford Newton, aged 88, received such a letter, but unfortunately thought it was junk mail and binned it! When he received a call from the palace asking why he had not responded, he replied, “You are having me on.” The official managed to convince him it was not a joke. The palace sent the replacement invite to his local vicar who ensured the formalities were completed.

Queen Elizabeth and Prince Phillip journeyed from London to Leicester by train.

After being formally welcomed to the city, they transferred to their dark burgundy colored Bentley flying the Royal Standard and journeyed via Humberstone Gate West, High Street and Jubilee Square to Leicester Cathedral, a Norman building originating in the 11th century, which replaced an earlier Saxon church. The route was lined with cheering crowds waving flags; some people had been there since 6:30 a.m. that day to secure a good spot.

The royal couple were greeted at the door of the cathedral by the Bishop of Leicester, the Right Reverend Martyn James Snow. The building was full to capacity. The Yeoman of the Guard (also known as Beefeaters) in their crimson uniforms heavily braided with gold formed the Queen’s Body Guard. The purses for distribution were placed on two large 17th century silver gilt salvers that form part of the Royal Regalia. They had been brought from the Jewel House at the Tower of London.

The proceedings lasted one hour. One of the recipients, Ted Cassidy, said after the service, “It’s been such a wonderful occasion — the queen is amazing because she smiled at every single person and then spoke to the children at the end. I thought she’s incredible, a wonderful woman.”

Among the onlookers were Chinese students from Leicester’s De Montfort University who were broadcasting the event live to friends and family in China. Ena Wang commented, “I have been so excited about today. She is the most lovely queen in the world.”

After the service Queen Elizabeth and the Duke of Edinburgh attended a reception and community lunch at St. Martin’s House. The singer Engelbert Humperdinck, who was born in the city, and Sir Alex Jeffreys of DNA fame, who is professor of genetics of the University of Leicester, also attended the lunch. 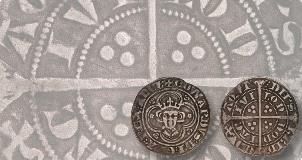 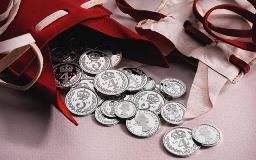 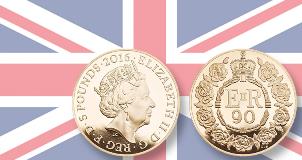