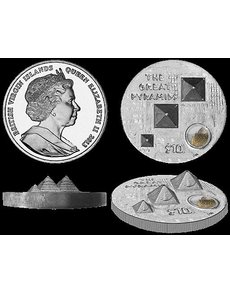 The pyramids of Giza rise above the surface of a new Proof silver $10 coin from the British Virgin Islands. The high-relief coin also features, in a plastic capsule, sand gathered at the famous site.

The pyramids of Giza rise above the sandy landscape, a marvel of ancient engineering and a modern-day draw to Egypt.

Now, recreations of the pyramids tower above the surface of a collector coin.

The Pobjoy Mint on May 13 announced a new high-relief Proof .9999 fine silver $10 coin featuring the Pyramids Necropolis of Giza. The coin was issued for the British Virgin Islands.

The coin celebrates what Pobjoy Mint calls “one of the world’s most beautiful and awe-inspiring sights.”

The Great Pyramid at Giza has stood at the end of the desert, to the west of the River Nile, since the 26th century B.C., when it was built for Pharaoh Khufu (Cheops). Two later kings of the fourth Dynasty — Khafre (Chefron) and Menkaure (Mycerinus) — built pyramids of their own close by the Great Pyramid. Together these three monuments form one of the world’s most familiar structural groupings.

The Great Pyramid stands 450 feet high and is constructed of more than 2.25 million blocks of limestone that weigh more than 2.5 tons each. Built in an estimated 30 years, the Great Pyramid was the world’s tallest structure for some 3,800 years, until the early 20th century.

It is the only remaining entry among the Seven Wonders of the Ancient World.

The new coin replicates the pyramids rising above the landscape with the highest point of the coin’s reverse design standing approximately 4.5 to 5 millimeters above the main surface of the coin (about a quarter-of-an-inch).

Viewed from the side, the three-dimensional pyramids and flowing sand from the dunes of Giza can be seen.

Encapsulated sand, brought back from the site of the Great Pyramids by Pobjoy Mint’s managing director, Taya Pobjoy, is embedded into the reverse of the coin, near the pyramids.

The obverse carries the effigy of Queen Elizabeth II by Ian Rank-Broadley.

The coin weighs 31.103 grams, measures 30 millimeters in diameter and has a mintage limit of 1,999 pieces. Each coin is presented in a gold-colored triangular box and costs $299 plus shipping and handling.