Putting boots on the coin 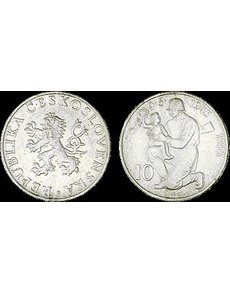 Celebrating the 10th anniversary of the end of German occupation in 1955, this Czech coin aptly illustrates the joy of liberation and home-coming. 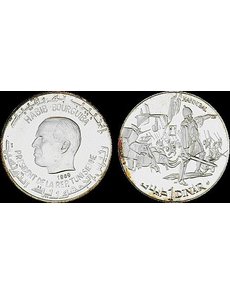 A 1969 Tunisian silver dinar points to the contributions of animals during wartime. In 218 B.C., Hannibal, a Carthaginian general, crossed the Pyrenees Mountains with 37 war elephants. 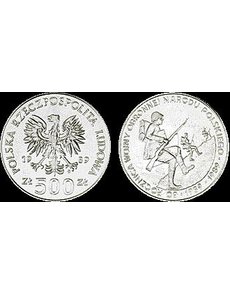 Commemorating 50 years of the Polish infantry in 1989, this 500-zloty coin honors the all-important foot soldier by showing a group advancing upon the enemy. 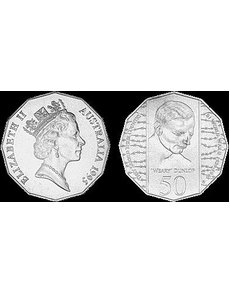 Lest we forget, a 12-sided Australian 1995 50-cent coin shows a medic behind the barbed wire of a labor camp. Edward “Weary” Dunlop kept alive many POWs during World War II. 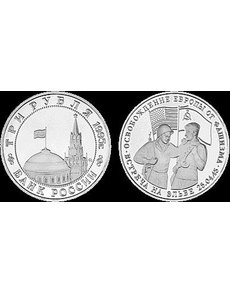 A 1995 Russian 3-ruble coin commemorates the 50th anniversary of Elbe Day, when Russian and American forces met within the German borders at the Elbe River, heralding the end of World War II in Europe. 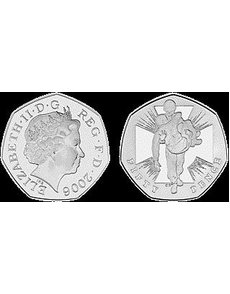 The reverse of a seven-sided Proof 2006 silver 50-pence coin of Great Britain depicts a soldier carrying his wounded comrade to safety, and his resulting award, the Victoria Cross. 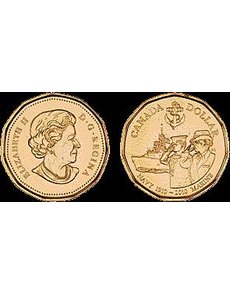 Canadian sailors and marines, both men and women, are honored on this 11-sided circulating commemorative dollar struck in 2010. 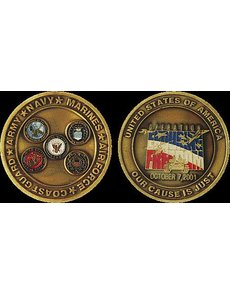 Military challenge coins, such as this one struck in 2001, are medals used to challenge and prove membership in a particular group or unit within the military.

Some of the military themes popular with topical coin collectors include battle commemoratives; coins depicting tanks, ships and planes; all types of weaponry; treaty and peace celebrations; and the topic of this month’s column, military men and women.

Soldiers, sailors and pilots can be found on a wide range of world coins and medals, and some have highly creative designs that evoke strong emotion.

An excellent recent example of this is a 2006 50-pence commemorative coin from Great Britain. To celebrate the 150th anniversary of the Victoria Cross, the highest military decoration for valor, Great Britain used the medal as a backdrop for an act of courage. In the foreground, a soldier carries a wounded comrade to safety, leaving no doubt about the type of military action that earns someone a Victoria Cross.

A favorite coin within this topic is the 1955 Czechoslovakian silver 10-korun piece. To note the 10th anniversary of the end of German occupation, the observer gets to relive the elation of liberation. As the Russian Red Army entered Prague, the last of the Nazis fled. The scene depicts a grateful child sitting on the knee of an infantryman and giving him a bouquet of flowers.

A source of great suffering for those who serve in the military is becoming a prisoner of war. Australia chose to recognize this and to honor all of its prisoners of war through a coin that singled out a particularly famous one. Edward “Weary” Dunlop was a medic during World War II whose hard work and courage kept many Australian POWs alive as they were forced to labor for the Japanese occupiers. After the war, Dunlop set an example of forgiveness and compassion. The 1995 Australian 50-cent coin shows Dunlop behind a screen of barbed wire.

Along with the joy of liberating a nation or a group of POWs there is another special occasion to look forward to in wartime: negotiating peace. In 1995, Russia issued a 3-ruble coin commemorating the 50th anniversary of Elbe Day. This meeting of the allies within German borders at the Elbe River on April 25, 1945, meant the end of World War II in Europe was near. Adolf Hitler committed suicide four days later. This coin design is also interesting as it features a U.S. flag on a non-U.S. coin.

Historically, foot soldiers have outnumbered all other kinds of military personnel and are frequently honored on coinage as a result. Poland paid tribute to its infantry on that military branch’s 50th anniversary in 1989. The 500-zloty coin shows a group of armed, helmeted Polish soldiers advancing toward their target. It is a design with which anyone who has served in any nation’s army can easily identify.

In modern times, more women are serving in the military than ever before, and in some nations, that also includes combat positions. Canada chose to call attention to the often overlooked female sailor with a 2010 dollar commemorative coin celebrating the centennial of the Canadian Navy and Marines, having a design depicting both a man and a woman in uniform.

A nation may operate two or three military branches, depending on that country’s defense needs, and it can be difficult finding coins that honor those who serve in the smaller units within those branches. A form of presentation medal generally called military challenge coins, or MCCs, can help fill the holes in a collection. MCCs are actually medals, sometimes enameled, that date back to World War I and are used to challenge and prove membership in a particular group within the military. Collectors have many varieties from which to choose.

One 2001 military challenge coin commemorates the start of Operation Enduring Freedom, Oct. 7, 2001. It pays homage to five of six American branches, including the Coast Guard, Marines, Air Force, Army and Navy. It lacks mention only of the National Guard to make it a complete U.S. military commemorative.

It is too easy to forget that nonhumans have always worked side by side with humans that serve in the military. Even in World War II, despite the proliferation of tanks and other armored vehicles, horses were an important part of land battles. Camels, mules, oxen, pigs, homing pigeons, dolphins, sea lions and dogs have all assisted with military objectives. The modern bomb-sniffing dog is considered an indispensable part of the U.S. military, almost as critical as the horse in older conflicts.

One example, the 1969 Tunisian silver dinar, shows military animals in action. Part of a coin series struck by America’s Franklin Mint for Tunisia, this coin commemorates the ancient army of the Carthaginian general Hannibal. In 218 B.C., Hannibal crossed the Pyrenees Mountains with 37 war elephants to attack Roman forces. ¦