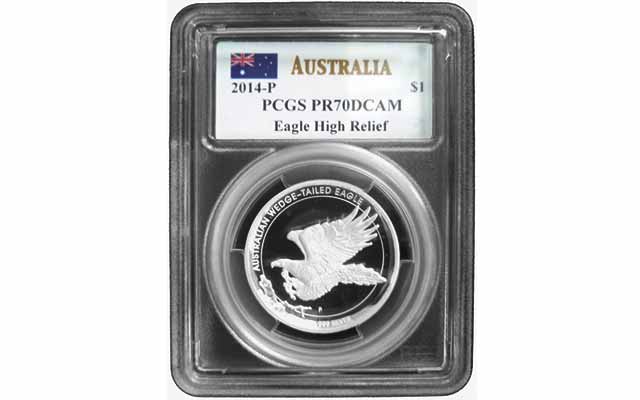 Editor's note: this is the final part of a series by Louis Golino exploring the demand for modern graded coins. The feature appears in the September monthly issue of Coin World.

Each collector has to make the decision about whether to buy a coin in its original packaging or an already graded example, or to submit an ungraded coin for grading.

Those decisions usually boil down to a cost-benefit analysis. If a buyer can obtain a coin in the top grade for almost the same price as an ungraded example, it may make economic sense, or be personal preference, to purchase the graded 70 coin.

In other cases, they may buy an ungraded example and notice, as with the Australian Proof 2014 Wedge-tailed Eagle, High Relief silver dollar, that if they turn out to be correct that the coin is a 70, they can add hundreds of dollars to the value of the coin in exchange for the grading fee. The scarcer and more popular a particular coin is, the higher the market value will be, in many cases, for the coin graded 70.

It is an open secret that professional graders typically spend little time examining modern coins, spending just seconds on each coin. But it is also the case that the leading grading companies have in recent years become stricter in their application of grading standards to all types of coins.

This reduces the odds that an individual submitter of a coin will receive the top grade on their submission, though that chance has to be weighed against factors such as the extremely high quality standards of modern world mints, which produce millions of virtually flawless coins.

Many buyers with a preference for graded modern coins find they often do better buying the coins already graded from a coin dealer or other seller, especially if the graded pieces are available at only a modest premium. However, the market for top-graded coins tends to be very volatile.

This is partly related to the fact that, over time, as more coins are submitted for grading, more coins will end up receiving the top grade, which will bring values down. This can result in very sharp declines in values for coins that at one point carried a large premium in the top grade.

Ian Russell, founder and president of GreatCollections, an auction company that sells a lot of modern coins, explained that, in terms of the results he sees, in auctions for graded modern world issues, “low mintage world gold and platinum issues” do very well.

He added that “many of the British, Canadian and Australian issues of late have some very attractive designs. We see demand from within the U.S. but also overseas for these issues. We are offering more and more world gold and platinum in our auctions each week.”

“I also want to discuss China specifically,” he continued. “The Chinese market is volatile, and issues from the past 30 years range in value from a few hundred dollars to more than $50,000 — we sold several 5-ounce Unicorns for over $50,000 in the past two years. Many of the low mintage Chinese coins were only sold outside of China, and those are now being repatriated back to China and Hong Kong.”

The growing trend of having modern world issues graded has done a lot to increase interest in this area of numismatics, especially within the United States; to expand the overall market for modern world coins; and of course to enhance the revenue of the companies that specialize in this area.

It is also a sign that the world coin market continues to mature, an encouraging sign for the future of the hobby as a whole.

More from CoinWorld.com:
Federal government to return millions of dollars in Liberty Dollar seized by authorities in 2007