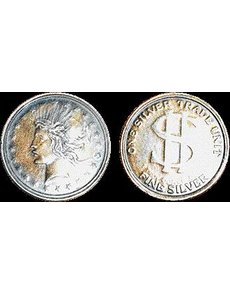 Photos submitted by a reader appear to show a privately struck silver round. If genuinely containing 1 troy ounce of .999 fine silver, its value is based on the daily spot price of silver.

I’ve had this silver piece for a long time. What can you tell me about it?

The images provided by Ms. Shelby seem to show a privately struck silver round.

The obverse of the piece has a rendering of Anthony de Francisci’s design for the Peace dollar of 1921 to 1935. The reverse is utilitarian, merely stating that it is a “Silver Trade Unit” along with its fineness (.999 fine silver) and weight (1 troy ounce). It is not legal tender.

It is difficult to determine when the piece was struck, and without seeing the piece up close, no engraver’s marks or other clues to the identity of the maker are discernible.

The piece resembles many silver rounds produced in the 1970s and 1980s, which often borrowed their designs from classic U.S. coin motifs, such as the Peace dollar. The rounds were marketed to silver investors then and have regained a measure of popularity with the rise of silver’s prices in recent years.

If the piece contains 1 troy ounce of silver, it has a value based upon the spot price of silver.

I recently found a silver bullion piece, but can find no information about it. The obverse says “One troy ounce, silver trade dollar, 31.1 grams, .999 fine silver,” with an eagle and flag. The reverse says “Minted from U.S. Strategic stockpile silver 1981, Formerly stored at U.S. Assay Office, San Francisco.”

I would like to know what it is, the number minted and possible value.

Based on Ms. Parrott’s description, the piece in question would be a privately minted silver round. This round was struck from silver sold by the federal government from its strategic stockpile, which had amassed more than 140 million ounces of silver by 1980.

According to a Coin World report from 1994: “A total of 2 million ounces of the silver was sold through public auctions in the fall of 1981, but [the auctions were] discontinued and replaced with the less disruptive coinage programs. Another 7.5 million ounces was sold at public sales scheduled over a three-year period, ending in 1991.”

By law, silver from this stockpile was also used to strike American Eagle silver bullion coins beginning in 1986 until the stockpile was depleted in late 2000.

The round might have a very small premium above the spot price of silver. We could not determine how many of the pieces were struck.