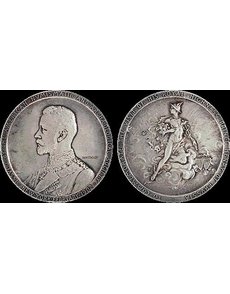 Sculptor Victor D. Brenner, renowned for his designs for the 1909 Lincoln cent, created this medal for the February 1902 U.S. visit by Prussian Prince Henry.

The name V.D. BRENNER on a 69-millimeter silver medal hailing the February 1902 visit of Prince Henry of Prussia to the United States identifies the medal as the work of one of America’s greatest medallic sculptors.

Victor David Brenner was born in Shavli in what was then Russian-occupied Lithuania in 1871, and died in the United States in 1924. He is best remembered by American collectors as the designer of the 1909 Lincoln cent. Almost everyone knows the story of the removal of his initials V.D.B. from the cent reverse by the U.S. Mint early in the first year of coinage.

However, Brenner’s greatest success was in the field of the medal, an area relatively little-known to many U.S. coin collectors, though pursued by ever-increasing numbers of advanced numismatists.

He began as a traditional die sinker, cutting his designs into the die steel entirely by eye. After study in Paris under Louis Oscar Roty, he mastered the newer method of creating large-diameter models that were then meticulously reduced to the desired size by the Janvier reducing machine.

Brenner designed several medals and plaquettes for the New York-based American Numismatic Society, and his Prince Henry medal was among the finest. ANS struck three Prince Henry medals in gold, 300 in silver, two in bronze and one in aluminum.

Prince Henry of Prussia was born Albert Wilhelm Heinrich of the royal-imperial House of Hohenzollern on Aug. 14, 1862, and died April 20, 1929. He was the third of eight children born to Prussia’s then-Crown Prince Friedrich, later the “90-day Kaiser” Friedrich III in 1888, and his spouse, Princess Victoria of Great Britain, daughter of Queen Victoria. He was the younger brother of Wilhelm II.

He married a cousin, Princess Irene of Hessen-Darmstadt, and had two sons, one of whom died very young from complication of hemophilia. Henry was a born diplomat who made a splendid impression on President Theodore Roosevelt and the American public during his American visit, where he received an honorary doctorate from Harvard University.

The prince was popular throughout the German navy, advocating new technologies, including the submarine, dirigible and airplane. After commanding the Baltic fleet in World War I, he left active service after the breakdown of Russia and survived the 1918 German revolution, remaining active in motor sports and sailing regattas. He died in 1929 of throat cancer.