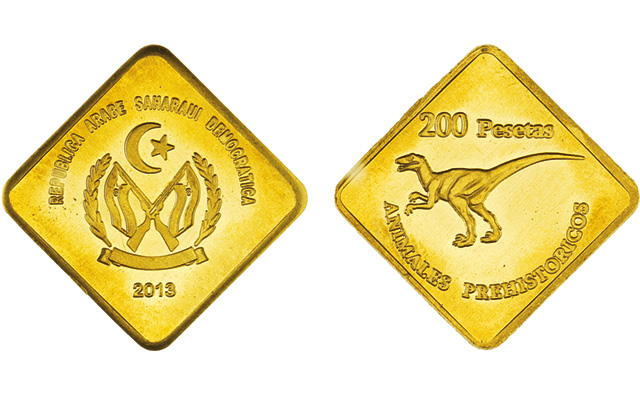 From the Saharawi Prehistoric Animals coin series, featuring many dinosaur species, the Abelisaurus appears on the 200-peseta coin. Think “mini tyrannosaurus rex” when looking at this dinosaur. Saharawi was formerly known as Spanish Sahara. 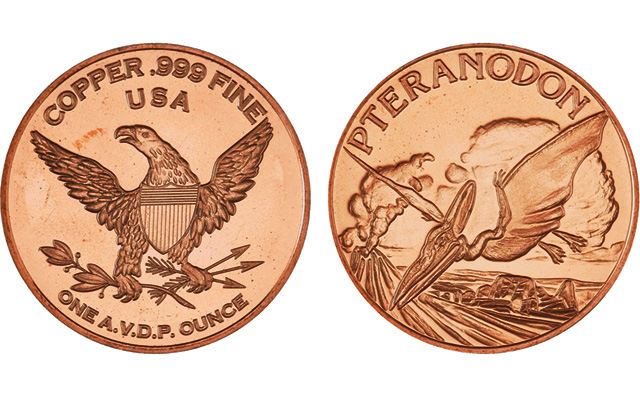 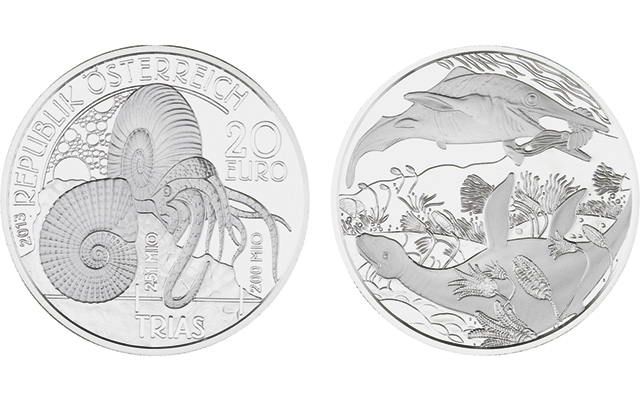 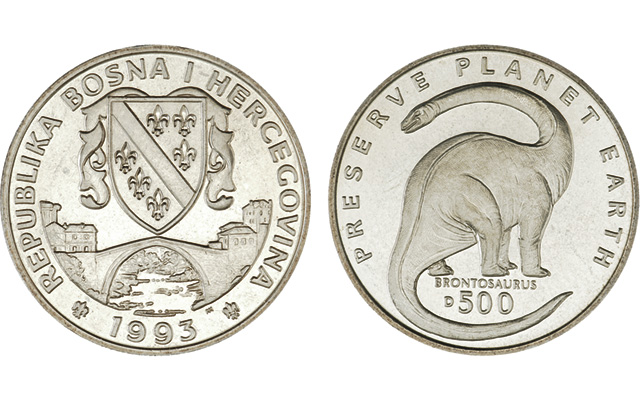 Labeled a brontosaurus by Bosnia-Herzegovina on a 1993 coin, this vegetarian giant is really an apatosaurus. 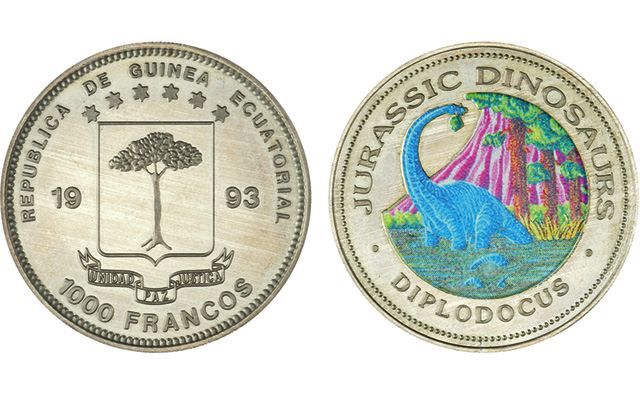 This 1993 mint-colorized diplodocus coin is one of a series from Equatorial Guinea dedicated to dinosaurs. It is among the world’s first official mint-colorized coins. 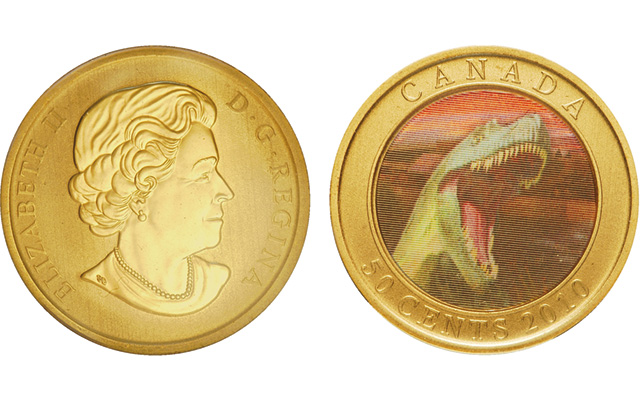 This Canadian 50-cent coin with latent image celebrates 25 years of the Royal Tyrrell Museum in Alberta. The dinosaur shape shifting on the coin is a close relative of tyrannosaurus rex, the albertosaurus. 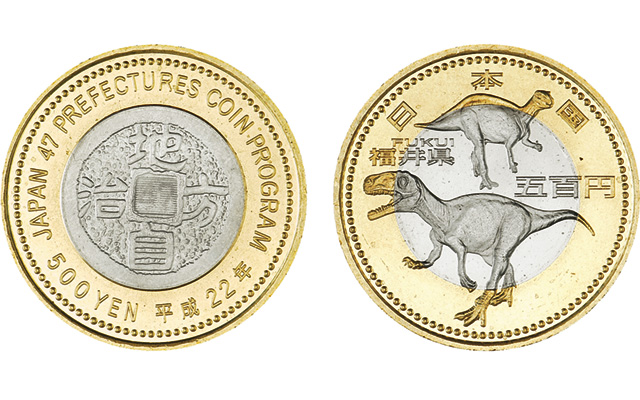 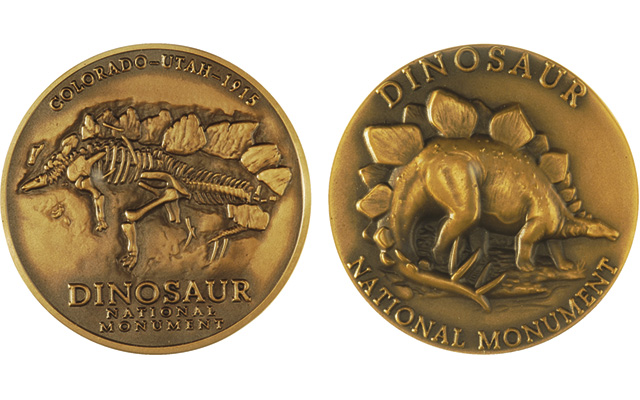 Part of the Medallic Art Co.’s National Park and Monuments Medal Series, this medal honors Dinosaur National Monument located in Colorado and Utah. One side shows a stegosaurus and the other, a stegosaurus fossil.

Many paleontologists agree that modern-day birds are actually avian dinosaurs. However, when most of us hear “dinosaur,” we are more likely to think “triceratops” than “red-breasted robin.” It has been 65 million years since the last nonavian dinosaur became extinct, but the world has an ongoing fascination and fondness for dinosaurs of all kinds, and for other prehistoric creatures contemporary to the dinosaurs that lived on land, on the wing, or in water.

It may just be a coincidence that the number of dinosaur-themed world coins and medals increased after the release of the 1993 movie Jurassic Park, but whatever the cause, interest shows no sign of stopping. In addition to the nations minting the coins pictured, nations that have numismatically featured the extinct creatures include these: Australia, Cambodia, China, Congo, Eritrea, Gibraltar, Guinea Bissau, Isle of Man, Laos, Liberia, Mongolia, North Korea, Sierra Leone, Togo and Vietnam. More nations are expected to join this club after the release of the fourth installment of the Jurassic Park movies in June 2015, Jurassic World.

One of the most beautiful and educational of the prehistoric coin series is “Prehistoric Life” (2013 to 2015), from Austria, with coins that highlight five eras: Triassic, Jurassic, Cretaceous, Tertiary, and Quaternary. One side of each Proof silver €20 coins provides a detailed vignette of the environment of a European prehistoric animal from the featured period, and the other, a close-up of one species as well as a depiction of that animal’s fossil. The Triassic coin, for example, takes a look at prehistoric creatures of the sea, including the ichthyosaurus (an aquatic reptile), ammonite (a form of mollusc), and a nothosaurus (another aquatic reptile).

Prehistoric creatures that lived at sea and on land are more common on coins than those that flew.

Liberia issued a flying archaeopteryx (an early bird) coin, and Poland offered a series of silver medals that included the pterodactylus (a flying reptile). Bullion provides another option. Copper bullion collectors can find large numbers of 1-ounce pure copper rounds at online sites like eBay.com that depict a pteranodon in flight.

It’s been more than 35 years since the name “brontosaurus” was labeled a fantasy by the paleontological world, but some folks still miss it.

Happily, the giant herbivore is real, but its correct name is “apatosaurus,” a fact lost on Bosnia-Herzegovina. This nation labeled the sauropod dinosaur on its 1993 copper-nickel 500-dinar coin a “Brontosaurus.” The apatosaurus was a long-necked quadruped with a long, whip-like tail. It could reach 75 feet in length and weigh 35 tons.

At 30 feet in length with a weight of about two tons, the theropod dinosaur abelisaurus does not sound small, but scientists say that the abelisaurus looked and acted very much like a smaller version of the tyrannosaurus rex. This South American carnivore was featured on a 2013 Saharawi 200-peseta coin, although many coin collectors incorrectly assume that they are looking at a velociraptor.

For years, the title of “World’s Largest Dinosaur” was held by the giant grazing diplodocus, with an average length of 90 feet and a weight of about 16 tons. But today, this animal has slid to tenth place on the list. The largest land animal that has ever lived was an herbivorous dinosaur called argentinosaurus. It was about 100 feet long and 100 tons heavy. In 1993, Equatorial Guinea issued a 1,000-franc coin honoring the diplodocus.

One of the world’s top dinosaur museums is in Japan.

Opened in 2000, the huge Fukui Prefectural Dinosaur Museum is located in the city of Katsuyama, Fukui Prefecture. Interest in the extinct animals increased when the fossils of two new dinosaur species were discovered in Fukui (pronounced FOO-kwee). They are both pictured on the 2010 Japanese ringed-bimetallic 500-yen coin. Even though they resemble each other at first glance, the one at the top of the coin, fukuisaurus, is an herbivore, and the one on the lower half of the coin, fukuiraptor, is a carnivore.

The Royal Tyrrell Museum in Drumheller, Alberta, Canada, is considered one of the top three dinosaur museums in the world. It celebrated its 25th anniversary in 2010 with a Canadian coin dedicated to its work. The latent image 50-cent coin was issued in a Royal Canadian Mint folder with six Dino Trading Cards. The dinosaur shape shifting on the coin is a close relative of tyrannosaurus rex named albertosaurus.

Finally, many beautiful silver and bronze medals have been made to celebrate dinosaurs, including a popular Medallic Arts Company bronze medal that is part of the National Park and Monuments Medal Series. Honoring the Dinosaur National Monument, which is located in Colorado and Utah and was established exactly 100 years ago in 1915, one side of the high relief medal shows a stegosaurus and the other, a stegosaurus fossil.