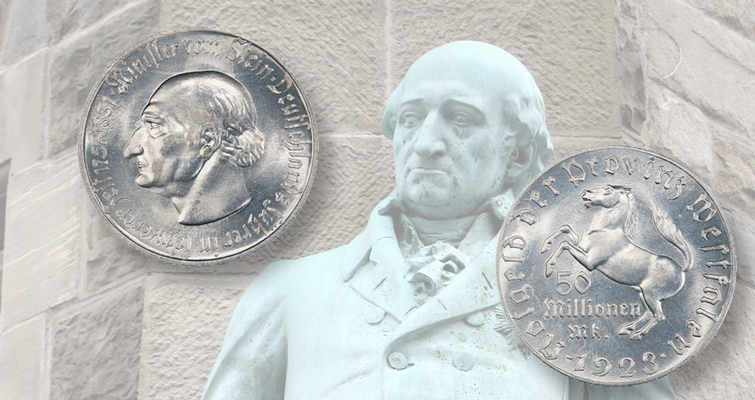 An aluminum 50-million-mark coin from Westphalia is offered in a May 4 auction.

Picture, if you will, an inflationary period with central banks printing money to cover massive debt.

OK, so it might not be a stretch to imagine that after all!

But nearly 100 years ago, inflation wreaked havoc on the German economy, and resulted in creation of an abundance of emergency money, known as notgeld. Most of it was in paper, though some issues were made from various metals and some from even porcelain.

One famous series is from Westphalia, in northwestern Germany. The pieces depict the iconic rearing horse taken from that area’s coat of arms.

Steve Album Rare Coins offers three examples from this series in its online-only auction on May 4.

The Westphalia notgeld spanned denominations from a mere 50 pfennigs all the way to 50 trillion marks, and was struck by five firms in aluminum, tombac and bronze.

Let’s focus on the aluminum 50-million-mark piece, the largest denomination being offered in the Album auction.

The obverse hails Stein as “Germany’s Leader in more Serious Times,” while the reverse presents the prancing white horse of Westphalia.

According to David T. Alexander, writing for Coin World in 2013, “Stein was a key figure in the small band of dynamic patriots whose drastic reforms saved from utter ruin what remained of King Friedrich Wilhelm III’s Prussia, defeated and dismembered by Napoleon. This legend implies that the defeated Germany of 1918 might be saved by similar heroic effort.”

According to Alexander, in 1940 Fritz Reissner opined that all Westphalian issues were really “medal-form remembrance pieces with denominations. ... By Spring 1923 they were worthless at their face values.” Many, indeed were distributed in provincial schools to highlight protest against foreign occupation of the Rhineland.

The piece in the Album auction is graded Mint State 64 by Professional Coin Grading Service and has an estimate of $50 to $75. 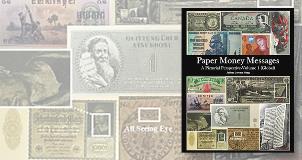 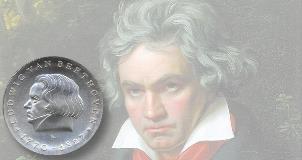 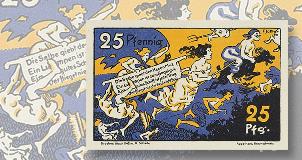