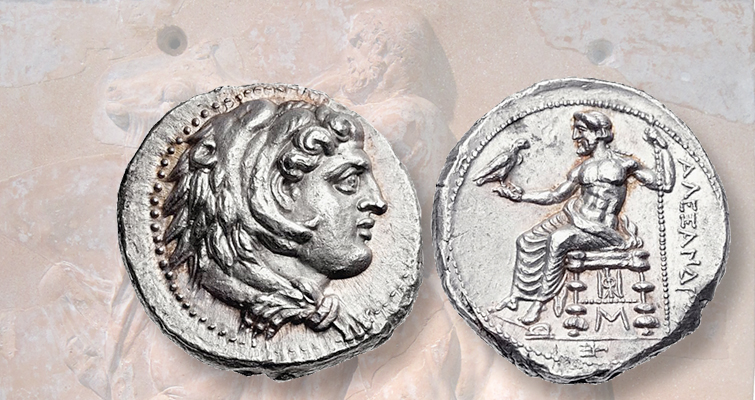 A robust portrait of Heracles and the seated figure of his father, Zeus, appear on this silver tetradrachm of Alexander III struck at Babylon, circa 324 to 323 B.C. 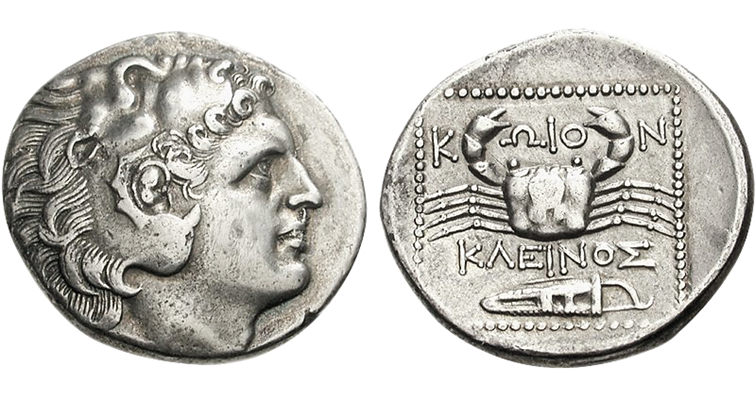 The features of Heracles are remarkably lifelike and individualistic on this silver tetradrachm of the Greek island of Cos, struck circa 300 to 250 B.C. 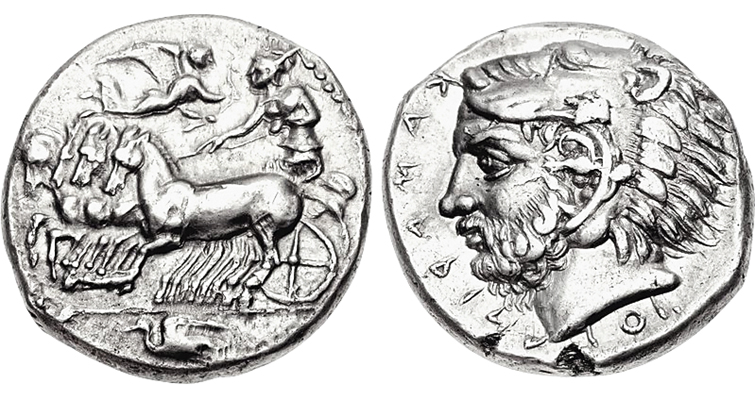 The artful bearded head of Heracles on this silver tetradrachm of the Sicilian mint of Camarina was engraved late in the fifth century B.C. The lion’s scalp is especially lifelike. 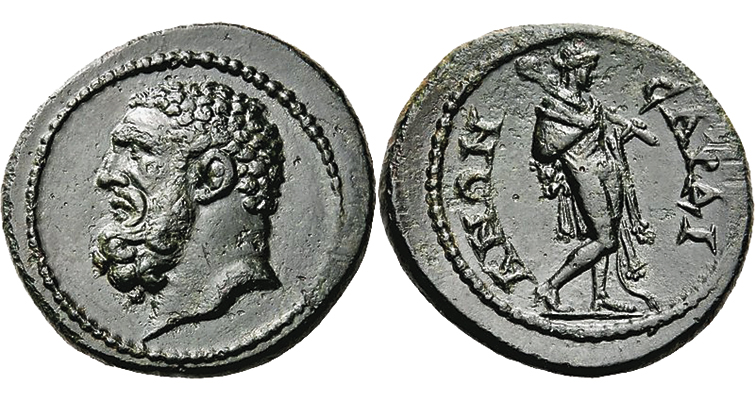 An old and weary Heracles, shown without his lion’s scalp, appears on this small bronze issued in the second or third century A.D. at Sardes in Lydia while it was under Roman rule. 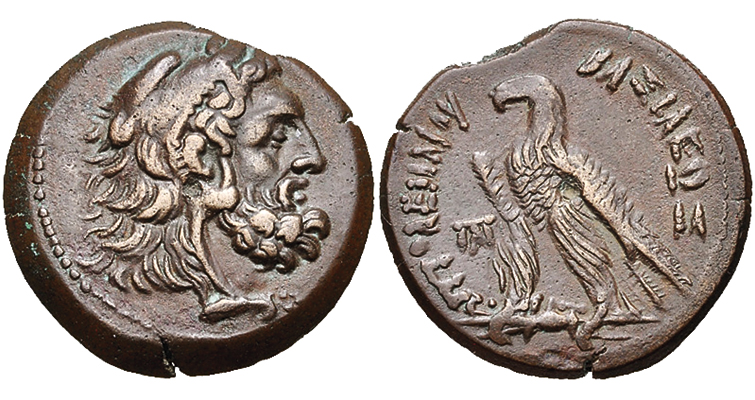 The bearded head of Heracles is unusually bold on this Egyptian bronze, which was perhaps issued by King Ptolemy VI in the mid-second century B.C. The reverse shows a standing eagle.

The Greek hero Heracles — known to the Romans as Hercules — looms large in ancient mythology.

As a son of the supreme Greek god Zeus, he was destined for greatness, but faced many trials in his adventurous life. He is a frequent subject in Greek art and makes innumerable appearances on Greek coins.

The chief opponent of Heracles was Hera, the most powerful of the Greek goddesses. As the wife of Zeus, she bore a grudge against Heracles for having been born to a mortal woman in one of Zeus’ many affairs. Though Heracles held a place in the Greek pantheon, he is considered a demi-god because of his mother’s mortality.

Hera tried to kill Heracles as an infant by sending two serpents into the crib he shared with his mortal half-brother Iphicles. But the effort failed when Heracles strangled both invaders and played with them as toys.

Later, after he married a mortal woman and fathered her children, Heracles was driven mad by Hera to such a degree that he murdered his children. The penance Heracles then endured comprised his celebrated “Twelve Labors,” which he performed on behalf of his archenemy Eurystheus.

Though these “Twelve Labors” were Heracles’ most famous deeds, he had many other adventures. Among them were his search for the Golden Fleece with the Argonauts, his slavery (and subsequent marriage) to the Lydian Queen Omphale, the liberation of the Titan Prometheus, and the sacking of Troy prior to its destruction in Homer’s Trojan War.

When Heracles finally died, he did so in a heroic fashion — even to the point of uprooting the trees needed to build the pyre upon which his body was burned. In dying, the immortal element of Heracles’ being was released and rose to Mount Olympus.

With such a long and rich life, filled with some of the most memorable exploits in Greek mythology, Heracles was destined for portrayal on many coins in the Greek world. Indeed, he appears on coins struck in places as far-flung as Spain, Britain, North Africa, and Afghanistan. A book of considerable size would be required to document and illustrate every known instance.

His appearances occur as both portraits and figural images. The latter type is extremely varied, ranging from a standing figure holding his most familiar symbols, a club, bow, arrow-filled quiver, and lion’s skin, to active scenes showing him engaged in a labor or some aspect of one of his many adventures.

The Greeks used his portrait on a great many coins issued from the sixth century B.C. through the third century A.D. The most familiar type shows him youthful and clean-shaven, wearing as a headdress the scalp of one of his victims, the Nemean lion. The forepaws of the unfortunate lion are tied around his neck. This image was reproduced on a very large scale by the Argead kings of Macedon, who considered themselves to be descendants of the hero.

The first Argead king to use the youthful portrait of Heracles on a large scale was Alexander III ‘the Great’ (336 to 323 B.C.). It graces the obverse of almost all of his silver coins and appears on a large percentage of his bronzes, which also were struck in immense quantities.

On a much smaller scale, the portrait of Heracles had appeared on coins of several of Alexander’s predecessors, the kings Archelaus (314 to 400 or 399 B.C.) through Philip II (359 to 336 B.C.). These kings used a mix of young, clean-shaven portraits and mature, bearded portraits of the hero.

The debate endures as to whether or not facial features of Alexander III are incorporated into the youthful Heracles portraits on his coins. That discussion is not yet resolved, though if any of Alexander’s Heracles portraits are meant to portray the famous king, the best candidates would be the ones struck at Babylon near the end of his life.

Alexander’s coin types were adopted by his immediate successors and by many independent Greek city-states. In fact, some cities used his coin types down through the first century B.C., as they found economic benefit in striking their own versions of Alexander’s familiar coin type.

Many independent mints in the Greek world used the youthful Heracles head on their coinage. Rather large issues of silver tetradrachms portraying Heracles were struck in Sicily by the Carthaginians to fund their war with the Greeks early in the third century B.C. Also, silver drachms and hemidrachms with a Heracles head modeled after Alexander’s were struck in the third and second centuries B.C. at Callatis, on the western coast of the Black Sea.

Copies of Alexander’s youthful Heracles also appear on independent coinages struck in Asia Minor in the fourth and third centuries B.C. These include silver tetradrachms and didrachms of the island of Cos, silver diobols of Pergamum in Mysia, and silver and bronze coins of Erythrai in Ionia of the fourth through the second centuries B.C.

The mature bearded portrait of Heracles also appears frequently on Greek coinage. In fact, it had been used on some of the earliest Greek coins to bear artistic designs, including electrum coins of circa 550 to 500 B.C. attributed to the cities of Erythrae and Cyzicus in western Asia Minor.

From the mid-fourth through the third centuries B.C. the bearded head of Heracles occurs on coins from Sicily, as well as from issues of Carystus on the island of Euboea, the island of Cos, and the city of Heraclea in Pontus. Some especially artful bearded Heracles heads appear on bronzes issued by Ptolemaic kings of Egypt during the second century B.C.

The popularity of Heracles as a subject of coin designs — especially as reverse type remained strong even after the Greeks lost their autonomy to the Romans. Portraits of Heracles rarely are used on Roman Provincial (or Greek Imperial) coins because a Roman portrait almost invariably occupies the obverse. However, on some issues Heracles’ head appears on the obverse, or, on some rare occasions local leaders were able to depict Heracles in lieu of their Roman overlord.