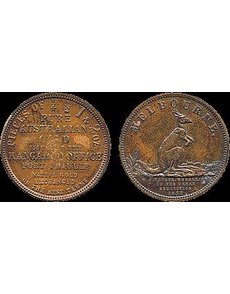 When an effort to fulfill coinage needs in Australia in the 1850s went awry, a limited number of patterns somehow survived.

One of those pattern pieces, struck in copper, was among the highlights of a collection of 19th century Australasian tokens offered by Baldwin’s in an Oct. 4 auction.

The token, an 1851 pattern copper halfpenny, was struck at the famous Port Philip Kangaroo Office during the same venture that led to the creation of some famed gold rarities.

The token advertises the office’s service, which converted gold dust and nuggets into locally struck pieces with British denominations. It is cataloged as Andrews 782 in the 1921 book Australasian Tokens & Coins by Arthur Andrews.

The effort failed to develop before the shortage of gold coinage balanced out and “a glut of English sovereigns” accumulated in the banks of Melbourne, according to Andrews. The entrepreneurs behind the token coinage, after having expended thousands of dollars, sold the machinery and abandoned the project.

An example in the Baldwin’s auction, displaying “striking weakness at the centre of the obverse and a couple of minute reverse imperfections,” otherwise grading Extremely Fine, realized £6,136 ($9,521 U.S.), including the 18 percent buyer’s fee.

A total of 624 lots from 738 offered (or 84.5 percent) sold in auction No. 72, the third and final auction conducted by Baldwin’s in connection with the annual Coinex show.

All lots from the auction can be viewed for free at www.baldwin.co.uk/auction-72.