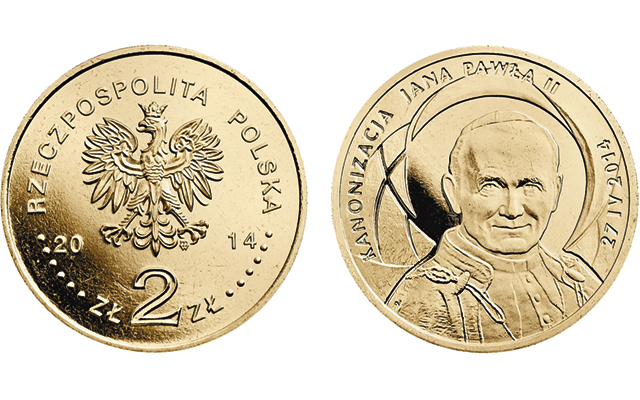 A new circulating 2-zloty coin was released April 15 to commemorate the April 27 canonization of Pope John Paul II. The coin has a mintage limit of 1.6 million pieces. 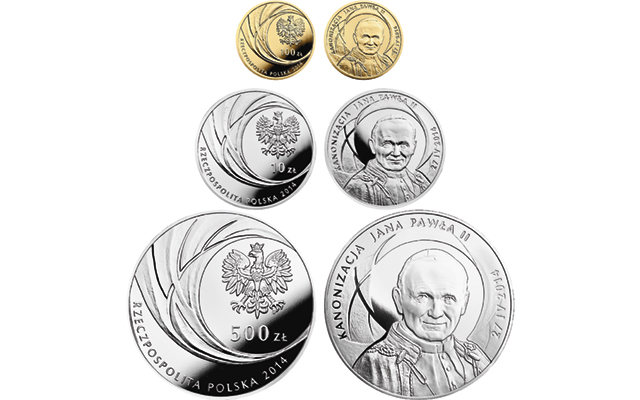 Pope John Paul II is being canonized April 27, and on April 15 the National Bank of Poland issued four coins honoring the new saint.

The pontiff was on the fast track to receiving sainthood, just nine years after his death April 2, 2005. The honor fulfills the wishes of Catholic faithful gathered in St. Peter’s Square in the days after his death, shouting “Santo Subito,” or “saint immediately.”

Pope John Paul II was born Karol Józef Wojtyla May 18, 1920, in Poland, and served as pope from Oct. 16, 1978, through his death. The traditional five-year waiting period to begin the canonization process was waived, and he was beatified in 2011.

The same image of Pope John Paul II appears on the reverse of each of the new coins, with a legend in Polish noting the canonization and date of April 27.

The obverse of the 2-zloty coin shows the Polish eagle coat of arms, a smaller version of which also appears on the obverses of the other coins, with a geometric configuration of lines in designs credited to Andrzej Nowakowski. The copper-aluminum-zinc-tin coin weighs 8.15 grams and measures 27 millimeters in diameter.

The gold 100-zloty coin weighs 8 grams, measures 21 millimeters in diameter and has a mintage limit of 5,000 pieces.

The Mint of Poland has not yet secured a distributor for this program in the United States, so collectors may have to search the secondary market.