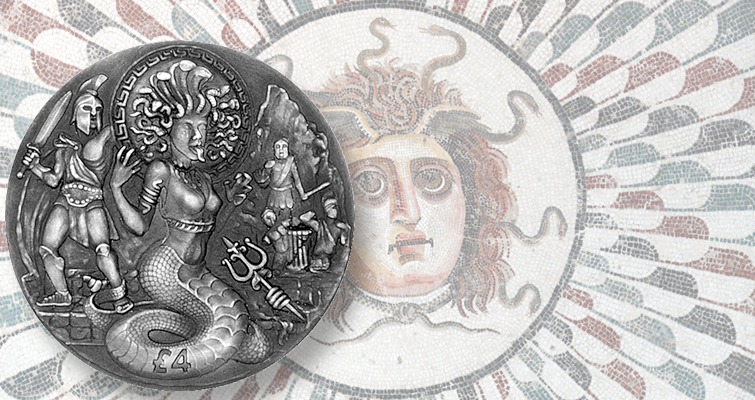 Medusa, the snake-headed Gorgon, is the fourth subject of the Pobjoy Mint’s Mythical Creatures series of £4 coins.

The five-coin series features 2-ounce .999 fine silver coins illustrating famous myths known the world over. The coins are produced in High Relief with each coin antique finished by hand.

The Medusa coin is issued on behalf of British Indian Ocean Territory.

Medusa was originally a beautiful young woman whose crowning glory was her long hair and she was therefore desired and courted by many suitors.

Before she could be betrothed to a husband, Neptune found her worshipping in the temple of Athena and ravished her. Athena was so angry that her sacred temple had been violated she turned Medusa’s beautiful tresses into snakes that gave her the power to turn anything who looked directly at her into stone.

The reverse of the coin shows Medusa surrounded by figures that have been turned into stone. Neptune’s trident can be seen in the surrounding water. The high relief and antique finish effects on the coin emphasize venomous snakes in place of her hair.

Coins in the series each weigh 50 grams, measure 62.21 millimeter in diameter and have a mintage limit of 650 pieces.

The final coin in the series will featuring the Centaur, and be released at an as yet unspecified date.

The Medusa coin is available for $169 from www.pobjoy.com. 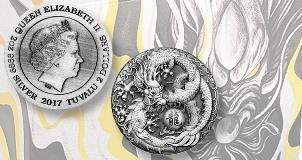 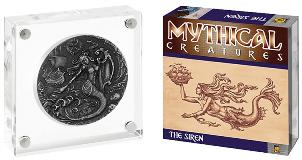 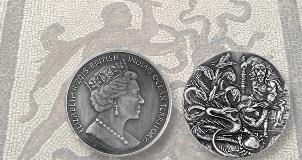