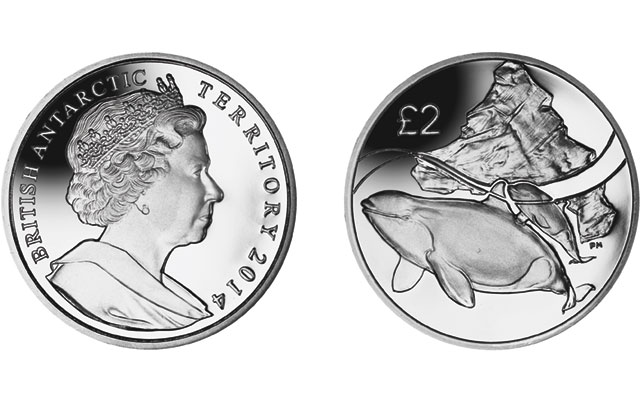 The Pobjoy Mint has issued a 2014 British Antarctic Territory £2 coin honoring the orca whale. The coin is available in a Proof silver version, shown, as well as in Brilliant Uncirculated copper-nickel.

Orca whales, also known as "killer whales," are the largest of the dolphins and one of the world’s most powerful predators.

They’re now on coins from the Pobjoy Mint and the British Antarctic Territory.

Although orca whales can be found in waters from the polar regions to the equator, they usually frequent cold coastal waters.

A typical orca whale distinctively bears a black back, white chest and sides and a white patch above and behind the eye. Calves are born with a yellowish or orange tint, which fades to white as they get older.

Orca whale males range from 20 to 26 feet long and weigh in excess of six tons. Orcas have no natural predators. They are sometimes called “wolves of the sea” because they hunt in groups like wolf packs.

The reverse of the coin shows an adult female orca with her calf swimming in the Antarctic waters with an iceberg in the background.

For more information or to order the coins, visit the company's website or telephone the Pobjoy Mint at 877-476-2569.