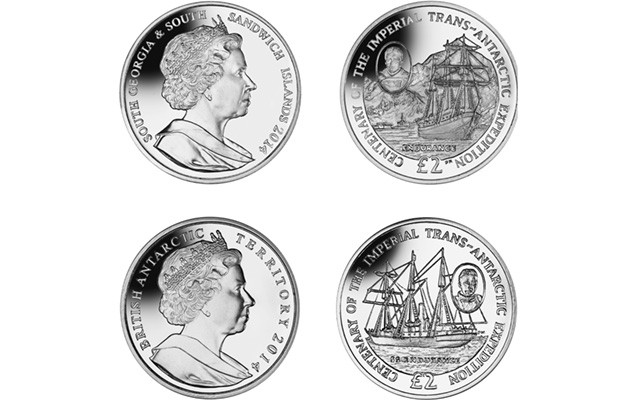 The Pobjoy Mint marks the centennial of the unsuccessful Trans-Antarctic Expedition with £2 coins from the British Antarctic Territory and South Georgia & South Sandwich Islands. 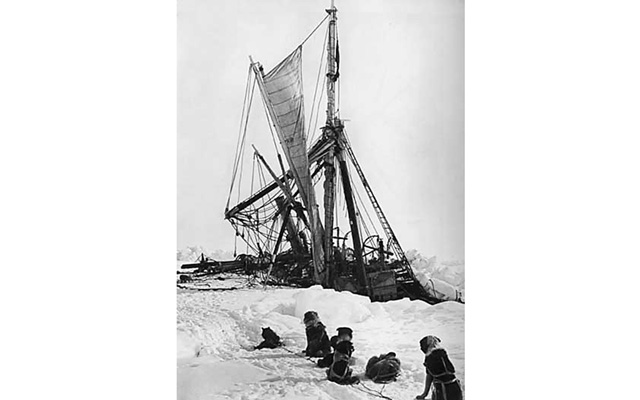 Explorer Sir Ernest Shackleton and some of his crew watch the sinking of the Endurance in heavy ice in November, 1915.

Endurance was the name of the ship used by explorer Ernest Shackleton, and it was endurance — human fortitude — that kept alive him and 28 other Trans-Atlantic Expedition members on their ultimately unsuccessful 19-month journey.

The Pobjoy Mint has released two non-circulating legal tender commemorative £2 coins marking the 100th Anniversary of the start of the Imperial Trans-Antarctic Expedition, also known as the Endurance Expedition. One coin is issued on behalf of British Antarctic Territory while the other is released on behalf of South Georgia & South Sandwich Islands.

The expedition is considered the last major expedition of the age of Antarctic exploration.

Conceived by Sir Ernest Shackleton, the expedition was an attempt to make the first land crossing of the Antarctic continent. Shackleton proposed to sail in his ship Endurance to the Weddell Sea and to land a shore party near Vahsel Bay, in preparation for a transcontinental march through the South Pole to the Ross Sea.

Shackleton and crew set sail from London on Aug. 1, 1914, headed to Argentina, where they departed on Oct. 26 for South Georgia.

The SS Endurance became trapped in the ice of the Weddell Sea and, despite efforts to free it, drifted northward held in the pack ice throughout the Antarctic winter of 1915. Eventually the ship was crushed and sank, stranding the crew on the ice.

After months spent in makeshift camps, the party used lifeboats to reach the uninhabited Elephant Island. Shackleton and five others then made an 800-mile open boat journey back to South Georgia and from there were able to mount a rescue of the remaining men on Elephant Island and bring them home without loss of life. A complete timeline can be viewed here and here.

To commemorate the start of this expedition, the first coin, on behalf of British Antarctic Territory, depicts the SS Endurance departing British waters with an inset cameo of Sir Ernest Shackleton.

The second coin, issued on behalf of South Georgia & South Sandwich Islands (the modern name of the entity that includes South Georgia), shows the Endurance at Grytviken, South Georgia, and also includes a cameo of Shackleton.

Both coins are available in copper-nickel and Proof .925 fine [sterling] silver and bear the Ian Rank-Broadley effigy of Queen Elizabeth II on the obverse.

Both Uncirculated and Proof versions weigh 28.28 grams and measure 38.6 millimeters in diameter.

The copper-nickel coins have an unlimited mintage, and the silver coins are limited to 10,000 pieces per design.

For more information, or to order these coins, visit the Pobjoy website.