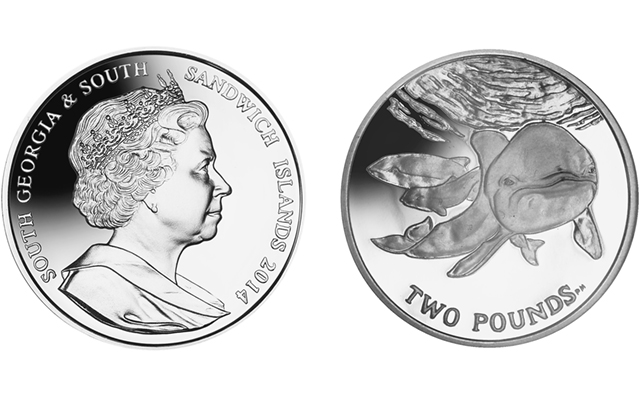 One design is available in either Uncirculated copper-nickel or Proof .925 fine silver versions.

The spectacled porpoise, a rarely seen member of the porpoise family, is believed to be found near the cool sub-Antarctic waters and has been seen off South Georgia in the Atlantic Ocean.

The species is easily distinguished from other porpoises by a characteristic dark ring around the eyes that is commonly surrounded by a light ring, which combines to resemble spectacles, giving the animals their name.

The spectacled porpoise has distinctive black and white markings – black above and white underneath – with a white stripe on the upper surface of the tail.  They are fast, active swimmers and normally avoid boats, which is why so little is known about this particular species. The total population is also unknown and therefore the species is listed as a Threatened Species.

The reverse of the coin features a spectacled porpoise in the foreground with a mother and her calf in the background. The obverse features an effigy of Queen Elizabeth II by Ian Rank-Broadley.

The copper-nickel £2 coin has an unlimited mintage and costs $16.95.

For more information or to order the coins, visit the Pobjoy Mint website or telephone the Mint at 877-476-2569.