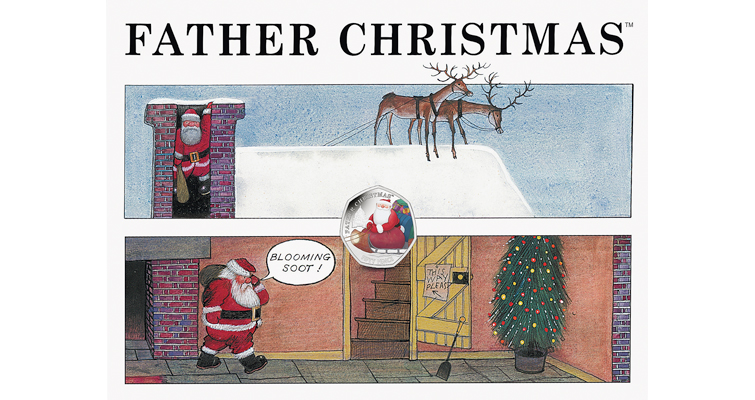 The Pobjoy Mint continues its Father Christmas coin issue in 2020 with a new design for the British Indian Ocean Territory. The colorful copper-nickel version appears here.

The character of Father Christmas as developed in a British children’s book written and illustrated by Raymond Briggs is immensely popular wherever the books are known.

For the third consecutive year, the Pobjoy Mint has issued licensed coins depicting this Father Christmas character. And in 2020, the coins are the first ever Christmas 50-penny coins issued on behalf of the British Indian Ocean Territory.

He still looks like the Father Christmas we all know and love, with his traditional large white beard and red suit. However, Briggs’ Father Christmas is a down-to-earth working man, living in contemporary Britain with his pets and reindeer, coping with everyday domestic chores and preparing for another Christmas.

The first book won the annual Kate Greenaway medal from the Library Association in 1973, which recognizes the year’s best children’s book illustration by a British subject. In addition, for the 50th anniversary of the medal in 2005, a panel named the 1973 book one of the top 10 winning works.

The 2020 coin design is inspired by an illustration from Briggs’ book showing Father Christmas riding his sleigh and delivering presents.

The coins are approved by Buckingham Palace, which is fitting since Father Christmas’ final delivery in each book is to the palace, according to the Pobjoy Mint.

The obverse of the coin carries the Pobjoy Mint’s exclusive effigy of Queen Elizabeth II.

The Pobjoy Mint offers multiple versions, with or without color, of the 2020 Father Christmas coins, totaling six different releases.

Four of the coins weigh 8 grams; the exceptions are the two piedfort versions, which weigh 16 grams.

All the coins measure 27.3 millimeters in diameter.

The copper-nickel versions have a combined mintage of 7,500 pieces, to be shared between the two options.

Silver and gold coins are presented in a red box with a certificate of authenticity. Collectors interested in a gold version should contact the U.S. office of Pobjoy for sales details. 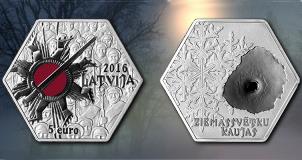 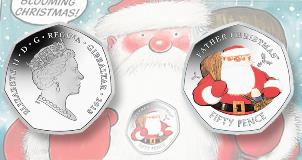 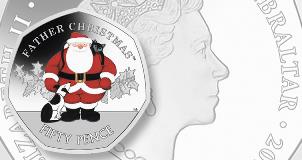