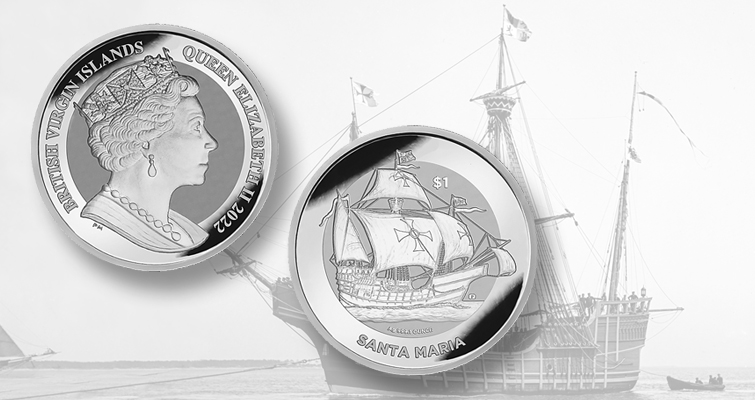 A new 1-ounce silver bullion coin from the Pobjoy Mint depicts the “Santa Maria,” one of three ships used by Christopher Columbus in 1492.


The 2022 1-ounce .999 fine silver dollar is issued on behalf of the British Virgin Islands and features the Santa Maria, one of Columbus’ famous ships.

The Santa Maria, originally nicknamed La Gallega, was the largest of three ships used by Christopher Columbus in 1492 during his first voyage across the Atlantic Ocean, with the other two ships being the Niña and the Pinta.

The Santa Maria is assumed to have been a medium-sized carrack, of around 58 feet in length on its single deck. Columbus’ ships were an improved type of caravel known as the caravela redonda, a three-masted ship where the first two masts were rigged with conventional square sails for open-ocean speed, and a third was rigged with a lateen sail for coastal manoeuvrability. That rigging combination made his ships some of the best sailing vessels of their time.

According to Columbus’ journal, on Christmas Day in 1492, the Santa Maria ran aground off the northern coast of Haiti, and records of the location of the wreck are noted in his journal.

Though many researchers have attempted to determine exactly where the ship ended its voyage, the location remains a mystery.

The obverse depicts an effigy of Queen Elizabeth II used exclusively by Pobjoy. 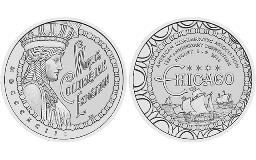 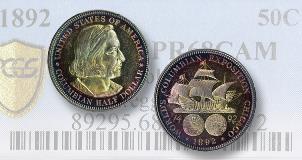 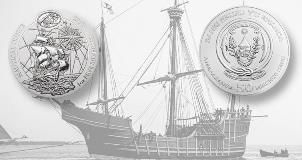