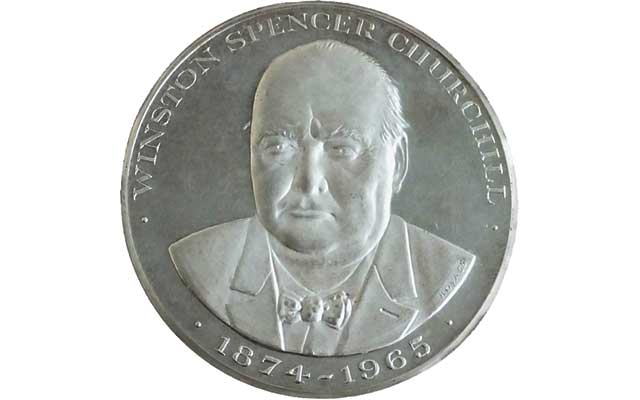 The Pobjoy Mint's very first project, a medal dedicated to statesman Prime Minister Winston Churchill was minted in 1965 as a memorial to the great leader. 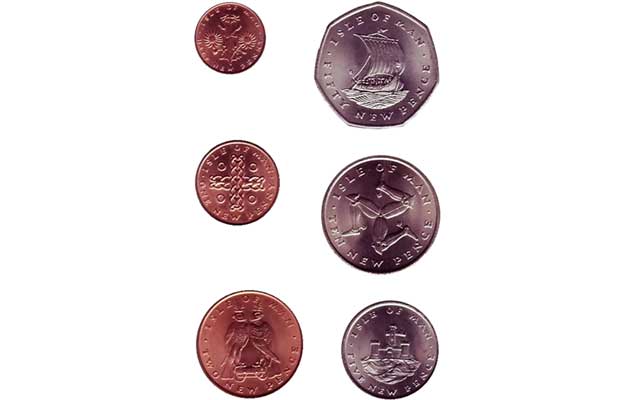 The Isle of Man’s new series of circulation coins were produced by Pobjoy Mint from 1972. The reverse designs have changed many times, and the obverse effigy of Queen Elizabeth II has also changed three times since 1972. 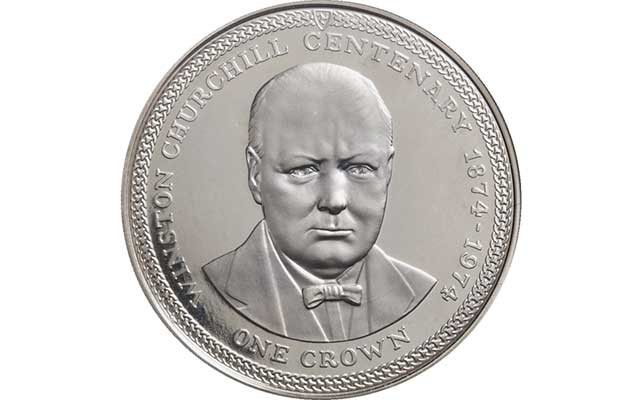 The Isle of Man’s first crown coin produced by Pobjoy Mint — issued in celebration of the 100th birth anniversary of Sir Winston Churchill — features a front-facing portrait of Churchill with an elaborate border and a denomination of one crown. 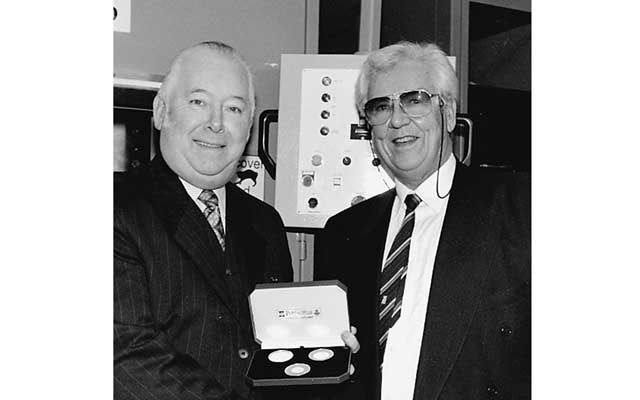 Derek Pobjoy, right, presents what the Pobjoy Mint billed as the world’s first euro-denominated coin examples to Donald Gelling, then chief minister of the Isle of Man, in 1996. The pieces were issued for the Isle of Man’s ever-increasing collector coin market.

The private Pobjoy Mint celebrates its 50th anniversary in 2015.

The British firm was founded by Derek Pobjoy.

Pobjoy, the son of a jeweler, already had some interest in coins and medals, stemming from the family trade of manufacturing gold and silver jewelery and objets d’art, according to a company history. But it was his wife’s father, an ardent coin collector, who showed his son-in-law an extensive coin collection and suggested, “You should look into the production of coins.”

It didn’t take Pobjoy long to consider his father-in-law’s suggestion — researching the manufacturing process and the potential market that could be generated, with creative marketing, soon after purchasing his first minting press.

The 90th birthday of Sir Winston Churchill in 1964 drew special interest in the United Kingdom, as politicians and others sought to honor the wartime leader.

According to the company history recently released by the Pobjoy Mint, with his firm as yet unincorporated, Pobjoy began working on a medal to mark Churchill’s birthday. Churchill’s health began failing, though, and government celebrations were muted or canceled.

With designs prepared, Pobjoy's medal was initially scheduled to be available in time for the leader’s birthday celebrations planned for November, according to the company history. However, the medal wound up being a memorial, as Churchill died Jan. 24, 1965.

In May 1965, Pobjoy formally incorporated the mint. In between Churchill’s death and the incorporation, work began on production of the Churchill memorial medal, the first project of the Pobjoy Mint.

Within weeks after the state funeral for Sir Winston Churchill, the Pobjoy Mint issued 22-, 38-, and 57-millimeter .925 fine silver medals, and a hallmarked .9167 fine gold version as well.

The medallic issue preceded release of the British 5-shilling Churchill crown coin (struck by the Royal Mint) and effectively launched the Pobjoy Mint.

According to the company history, for many years and in many countries, the production of commemorative or collector coins was extremely limited, insomuch as the issue of a commemorative coin was strictly reserved for very special occasions or national anniversaries which came around very seldom — and usually limited to countries with rich numismatic histories.

It was Derek Pobjoy’s belief that a country — particularly those that were small and had either limited issues or were using the currency of other countries — should be able to commemorate international events, such as the Olympics or the World Cup, especially if the country in question was a participant, according to the company history.

This belief spurred the advent of the modern collector coin, the firm states.

The firm’s original location in Carnaby Street, London, contained a small staff made up of family members who were also involved in the original jewelery business.

One of the siblings agreed to set up the North American branch of the newly formed Pobjoy Mint. As the mint’s commissions and activities increased, so did its overall staff, according to the company history.

The company history relates that the Pobjoy Mint’s growth began once it secured a contract to supply the Isle of Man with circulation and commemorative coins.

The Pobjoy Mint’s first circulating coins for the Isle of Man appeared in 1972.

These coins corresponded to the same values and specifications as British coins, from half- to 50-penny coins, with motifs reflecting the history and culture of the small island nation.

It was the first time since the reign of King George III that the population of the Isle of Man saw their distinctive three-legged triskele insignia in circulation — it was chosen for the 10-new-penny coin's reverse.

In 1974, the Isle of Man launched its first Pobjoy-produced crown coin in copper-nickel and .925 fine silver versions. The coin issue celebrated the 100th anniversary of the birth of Sir Winston Churchill, the man whose medal had launched the Pobjoy brand.

All of thes Isle of Man coins feature the Arnold Machin portrait of Queen Elizabeth II on the obverse, and, according to the company, they were an immediate hit with collectors.

During the intervening decades, among the Pobjoy Mint's achievements was the mint’s development of an alloy it calls Virenium. The alloy has been successfully used in high denomination coinage since 1978, according to the firm.

In 1990, Derek’s daughter Taya took the helm of the Pobjoy Mint.

Currently, the Pobjoy Mint provides circulation and collector coinage for 12 countries and territories.

As of 2015, the Pobjoy Mint employs up to 100 staff members, including engravers, die-casters and moulders, marketing and press officers, and production staff and those involved with specialty packaging.

Their purpose-built premises in Kingswood, about 20 miles from the center of London, is a sprawling compound that accommodates the firm's assortment of minting presses and die makers, design studios, business offices, board rooms and reception rooms where some well-known world personalities have been received.

The firm is still privately owned and operated.

According to Taya Pobjoy, who was appointed to the post of managing director in 1998, the Pobjoy Mint will continue to “keep up with the numismatic world, keep going with innovative products and to particularly continue to look at achieving ‘world firsts.’ ”