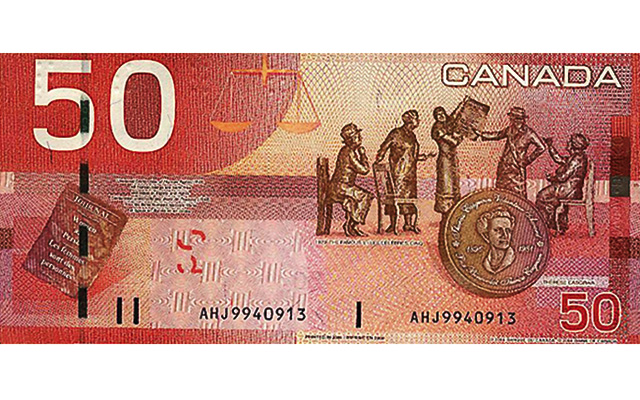 The design of the back of the $50 Canadian notes issued in 2004 depict the "Famous Five" women who worked on women's rights. The design was replaced with a design of a icebreaker.

A petition to include women on Canada’s banknotes is approaching its goal of 50,000 signatures. According to a Huffington Post Canada report, it had 48,000 signatures by early November.

The petition on Change.org/CanadianHeroines calls for the Bank of Canada to be more inclusive with the faces it shows on its money. Currently, the only woman shown on Canadian paper money is Queen Elizabeth, aside from an illustration of a nameless female scientist on the $100 bill.

The petition description points out that the last version of the $50 bill, which featured the Famous 5 and Therese Casgrain, was replaced by an image of an icebreaker when Canada's new polymer bank notes were introduced.

According to the petition, the Famous Five or The Valiant Five were five Canadian women who asked the Supreme Court of Canada to answer the question, "Does the word 'Persons' in Section 24 of the British North America Act, 1867, include female persons?"

These women sought to gain legal equality for women to be considered persons and thereby be eligible for elected office.

On April 24, 1928, Canada’s Supreme Court summarized its unanimous decision that women are not such “persons.” The judgment was overturned by the British Judicial Committee of the Privy Council on Oct. 18, 1929, according to the petition.

“We call on the Bank of Canada to add women from Canadian history to our bank notes as soon as possible, and announce that all future series will feature females as well as males,” according to the petition organized by Merna Forster. “Bank notes that belong to all Canadians should depict a wider range of Canadians, of both genders as well as various ethnic origins. An all-male line-up on bank notes is not acceptable in Canada.”