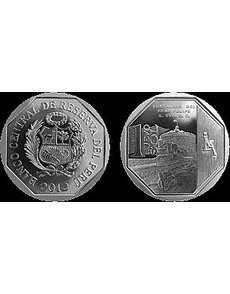 Peru’s latest 1-nuevo sol coin in the Wealth and Pride series honors an important fortress near Lima: the fortress of Real Felipe.

A military fortress in Peru is the latest item honored on circulating 1-nuevo-sol coins in Peru.

The fortress of Real Felipe, in Callao, the largest and most important port of Peru, is featured on a new 1-nuevo-sol coin. The copper-nickel-zinc coin, released July 3, is the ninth issue in Peru’s Wealth and Pride series of circulating commemorative 1-nuevo-sol coins.

The fort, which was built from 1747 to 1774, is the largest example of Spanish colonial-era military architecture. It was built to defend the port and the nearby city of Lima for many reasons, including the region’s role as the city of departure for shipments of gold destined for the motherland. The castle stands on the promontory overlooking the harbor and was the site of “Rodil’s last stand,” where Spanish royalists led by José Ramón Rodil gasped their final breath in the battle against Peruvian independence fighters in the mid-1820s.

The reverse of the coin shows the “Tower of the King” in the center of a wide shot of the site, with guns or cannons belonging to the museum, all below a phrase that translates to “Fort of Real Felipe.” In addition, the Mint mark appears, and the scene is positioned against a backdrop of vertical lines. The Roman numerals indicate the site dates to the 18th century.

The coin weighs 7.32 grams, measures 25.5 millimeters in diameter and has a mintage limit of 10 million pieces.

The 1-nuevo-sol coin has a face value equivalent to about 38 cents in U.S. funds. ¦