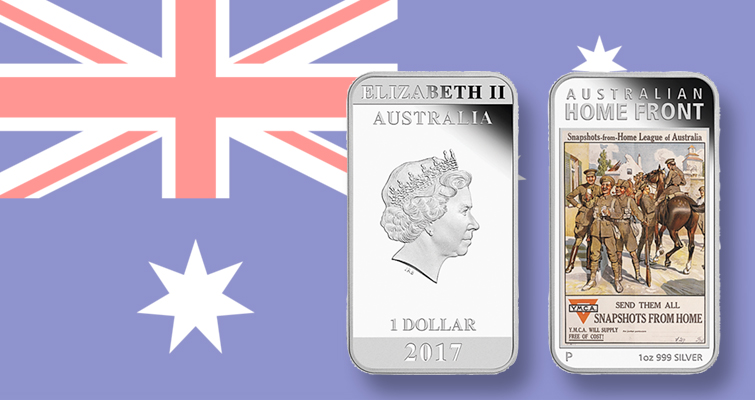 The fourth coin in the Perth Mint’s War Posters series celebrates the movement to send photos from home to soldiers on the front lines. The Proof silver $1 has one ounce of pure silver.

When Australia went to war in the 1910s, artists went to work creating posters supporting the war effort.

These posters are modern inspirations for an annual coin series issued by the Perth Mint.

The Proof 2017 silver dollar, the fourth in the series that began in 2014, depicts a poster created in 1916 by the Young Men’s Christian Association.

The YMCA established the Snapshots from Home League of Australia, which aimed to raise the morale of those Australians serving in World War I by supplying them with photographs of their loved ones at home.

These photos were then sent free of charge via the YMCA to troops in hospitals and on the front lines in Europe and the Middle East.

The “Send them all snapshots from home” poster was among several Australian versions of a series of posters commissioned in 1915 by the YMCA. The poster is the subject of the 2017 coin.

Designed by artist Fred Pegram, the colorful poster features a group of Australian soldiers in a French village smiling and passing around photographs received from home. It was one of the most effective World War I campaigns in Australia, according to the Perth Mint.

The coin’s obverse depicts the Ian Rank-Broadley effigy of Queen Elizabeth II, the monetary denomination, and the 2017 year-date.

Enlistment was honored on a coin in 2014, with the Australian Red Cross the subject of 2015’s coin. Australian war bonds feature on the 2016 coin, and the final coin, scheduled for release in 2018, is slated to honor the peace bonds that supported war recovery.

The 2017 coin is housed in a latex case that displays both sides of the coin. The case is packaged within an illustrated shipper and is accompanied by a numbered certificate of authenticity.

Distributor Talisman Coins offers the coin at a fixed price in U.S. dollars, for $62.95. To learn more or order the coins or sets, visit the distributor website.