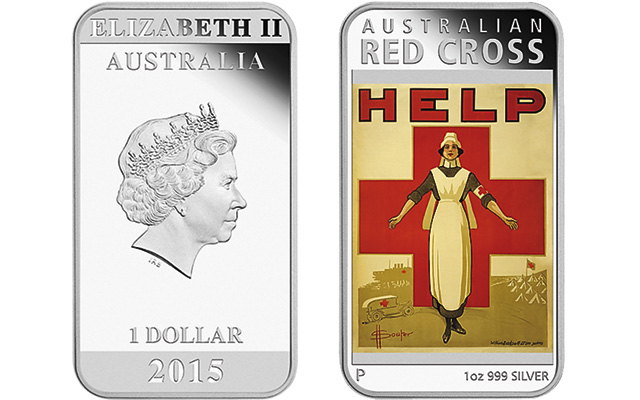 The Perth Mint's Posters of World War I silver $1 coin series continues with a scene from a Red Cross poster.

The sacrifice of war isn’t confined to the front lines.

A new Proof .999 fine silver $1 from the Perth Mint serves as a reminder of a facet of the homefront effort.

David Henry Souter’s colorful “Help” poster was designed to inspire Australian nurses to join the Red Cross in support of the war effort, and remained in print until 1918. The image appears on the reverse of the latest coin in the Perth Mint's World War I posters commemorative series.

The poster features an Australian Red Cross woman in uniform standing with arms outstretched, as if appealing for help, in front of a red cross. In the background is a medical ship, an ambulance and a field hospital, each bearing the protective Red Cross emblem.

Throughout the course of World War I, recruitment campaigns ran throughout Australia encouraging women to join the Red Cross or to volunteer their services on the homefront.

Posters were an integral part of these campaigns. Artists were commissioned to produce works that would inspire women to support Australian troops through fundraising efforts, quasi-nursing duties, organizing comfort packages to send to soldiers, and volunteering to work in the Red Cross’ Wounded and Missing Enquiry Bureau.

Wade Robinson of the Perth Mint staff is credited with preparing the design for striking.

The obverse depicts the Ian Rank-Broadley effigy of Queen Elizabeth II, the denomination, and the 2015 year-date.

The 2015 coin is housed in a latex case that displays the coin’s reverse and obverse. It is presented in a themed shipper, and is accompanied by a numbered certificate of authenticity.

The coin is available from the Perth Mint at an official issue price of $72.66 U.S., plus shipping.

Official distributor Talisman Coins offers the coin for $69.95 each, with a discounted price of $66.95 each for purchases of three coins or more.