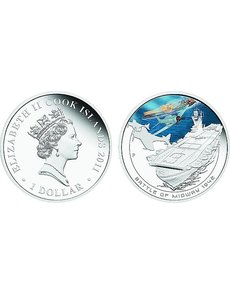 A new collector coin issued by the Perth Mint commemorates a famous naval battle of World War II, the Battle of Midway. A U.S. Douglas SBD-3 Dauntless bomber is seen sinking the Japanese carrier Akagi, with the USS Enterprise, a Yorktown class aircraft carrier, in the foreground.

A new noncirculating legal tender coin from Cook Islands marks the American triumph in the Battle of Midway.

One flies above, having just dumped its deadly payload on the Akagi, a Japanese aircraft carrier, which is seen aflame.

The USS Enterprise, a Yorktown class aircraft carrier, dominates the foreground in an area that is not colored.

Two Dauntless dive bombers fly at the edge of the colorful field.

Darryl Belloti is credited with the reverse design. Raphael Maklouf’s effigy of Queen Elizabeth II appears on the obverse.

The Battle of Midway is widely regarded as one of the most important naval battles of the Pacific Campaign of World War II.

While Pearl Harbor was disastrous, it did not disable the U.S. fleet strength (the Pacific Fleet’s aircraft carriers were out to sea during the attack).

At the Battle of Midway, however, the Japanese aimed to finish what began on that day of infamy.

Though outnumbered at the Battle of Midway, the United States Navy decisively waged war on the imperial Japanese Navy for four days in early June 1942, inflicting irreparable damage on the Japanese fleet.

British military historian John Keegan has described the Battle as “the most stunning and decisive blow in the history of naval warfare.”

It required the confluence of luck and skillful strategy on more than one account.

Though Japanese Adm. Isoroku Yamamoto hoped to ensnare U.S. forces in a trap, American military intelligence allowed the U.S. fleet to instead lay the trap for the Japanese.

By battle’s end, four Japanese fleet carriers were sunk, with a near-total loss of their crews, at the cost of one American carrier, USS Yorktown.