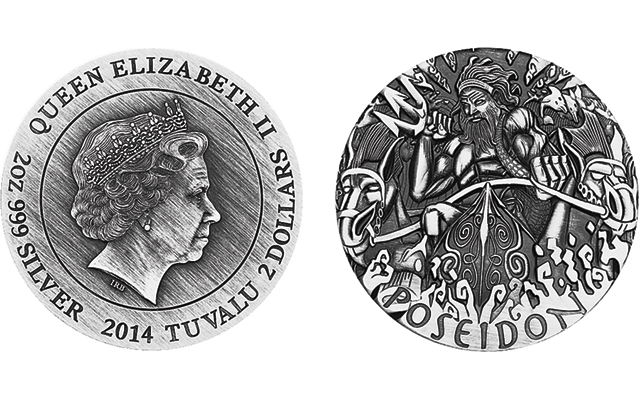 The Perth Mint’s Gods of Olympus series of high relief, antique Proof silver $2 coins continues with a new issue honoring Poseidon, the god of the sea. Its 1,500 mintage limit is expected to sell out quickly.

Poseidon may rule the sea, but he now shines in silver as well.

The Perth Mint on June 3 (June 2 in North America) launched the second high relief Antique Proof silver coin in the Gods of Olympus series. Poseidon, the god of the sea, is the newest subject.

The coin’s reverse, by designer Tom Vaughan, depicts a bearded Poseidon riding the waves on his chariot pulled by two hippocampi, clutching his trident, with dolphins porposing in the background. The design includes the inscription POSEIDON and the Perth Mint’s P Mint mark (found at the nine o'clock position).

The coin’s obverse portrays the Ian Rank-Broadley effigy of Queen Elizabeth II, the  denomination and the 2014 year-date.

To capture the depth and detail of the design, the coin is struck in high relief to a rimless format.

In ancient Greek mythology, Poseidon was worshipped as the god of the sea. Adept at gathering clouds and creating violent storms, Poseidon was judged responsible for countless shipwrecks and the drowning of many souls, yet he also held the power to grant a ship a successful voyage, and to save those in danger. He is also often referred to as the “earth-shaker” due to his penchant for causing earthquakes.

The new 2-ounce .999 fine silver $2 coin is struck for Tuvalu and follows the rapid sellout of the first coin in the series, which honors Zeus. The Zeus coins are trading for near $500 U.S. in the secondary market, and the Poseidon coins are expected to sell out their 1,500 mintage limit as well.

The third issue will honor Hades, but no release date has been provided.

The coins weigh 62.27 grams, measure 40.5 millimeters in diameter and are 6 millimeters thick.

The coins retail for $179 Australian.

Distributor Talisman Coins offers the coins to collectors in North America for $249.95 U.S. To order from Talisman, visit the firm’s website or telephone the firm toll free at 888-552-2646.