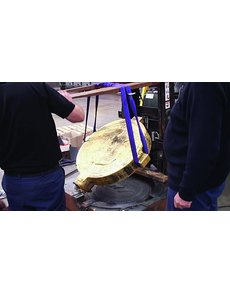 After the gold cooled, the weighty coin had to be removed from the mold with the assistance of a forklift. 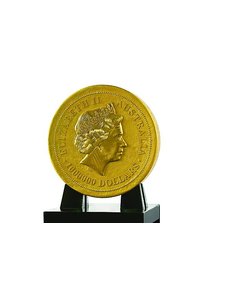 The Ian Rank-Broadley effigy of Queen Elizabeth II appears on the obverse of the giant coin. 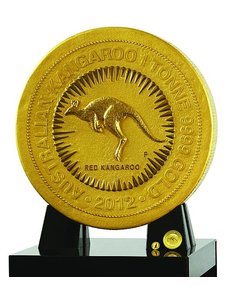 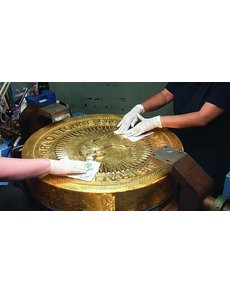 Perth Mint workers spent months finishing the coin, in tasks including polishing its surface and adding reeding to the edge. 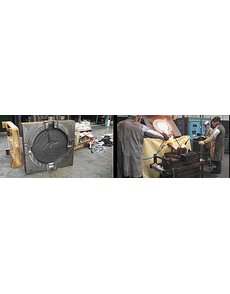 The reverse mold, left, was one of the two molds used in the coin’s creation. Casting required the thousands of ounces of molten gold to be poured into the secured molds, right.

It will take mighty deep pockets to buy the Perth Mint’s latest coin. Some added width would help, too.

The coin, unique so far, is the latest volley in the ongoing battle between world mints for supremacy when it comes to giant world gold coins.

If the Perth Mint had struck its standard 1-ounce .9999 fine gold $100 Kangaroo coins from the gold dedicated to the $1 million coin, the resulting stack of coins, one coin wide, would measure 295 feet, or almost as tall as the Statue of Liberty, pedestal and all.

In an understatement, Perth Mint Chief Executive Officer Ed Harbuz said, “It was a big casting by anyone’s standards, probably the biggest pure gold casting that anyone’s ever done.”

The new coin contains 10 times the amount of gold in the $1 million coin that the Royal Canadian Mint issued, to similar fanfare, in 2007; the 100-kilogram Canadian coin, however, was made from .99999 fine gold, a higher level of purity.

The Perth Mint has created the coin for the same reason that the Royal Canadian Mint and the Austrian Mint before them have issued giant gold coins: publicity.

“The Australian Kangaroo gold bullion coin is one of the most popular bullion coins in the world, but we wanted to raise its profile even more,” Harbuz said.

At this stage only one example of the $1 million Australian coin has been produced, according to Matthew Holmes, a spokesman at the Perth Mint. “It is unlikely that we would consider making another one, unless this one was sold,” he said.

The coin was cast at the Perth Mint’s refinery and handcrafted at the mint in a process that took months. “To cast and handcraft a coin of this size and weight was an incredible challenge,” Harbuz said, and one he believed few other mints would attempt.

Molten gold was poured into two molds that were paired together, and once the gold cooled, a forklift was required just to lift the coin out of its mold. Then, Perth Mint workers trimmed the four “handles” on the coin, polished the surface and added the reeded edge in finishing the coin.

The Perth Mint has posted a video of the process at www.youtube.com/watch?v=R1KoF8Ik24Y, and at a special website it created, www.1tonnegoldcoin.com.

The Australian $1 million coin features the classic Stuart Devlin design of a red kangaroo on the reverse, as it has appeared on each annual 1-kilogram gold release in the series since 1990. Stylized rays of the sun surround the kangaroo, bordered by the inscription australian kangaroo 1 tonne 9999 gold, and the year date 2012.

The Ian Rank-Broadley effigy of Queen Elizabeth II appears on the obverse, accompanied by the inscriptions elizabeth ii, australia and 1 million dollars.

The $1 million coin is now the centerpiece of the Australian Kangaroo gold bullion program, which has expanded from the traditional offering of a 1-ounce .9999 fine gold $100 coin to offer multiple fractional and large sized versions, previously topped by a 10-kilogram version offered since 2006.

The program features various mintage limits and annual design changes, though the 1-kilo coins have retained the original Devlin design.

The 2012 Kangaroo gold bullion coin program, which made its debut Oct. 4, features a standing kangaroo set against an outback scene in a design available in tenth-, quarter-, half- and 1-ounce sizes.

The Australian effort is also just the latest development in the ongoing effort among world mints to claim supremacy in the giant coin category.

The $1 million coin from Canada measures 53 centimeters (20.86 inches) in diameter and is some 3 centimeters thick.