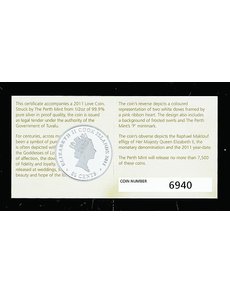 The certificate tells part of the story with this new Proof silver 50-cent coin from Cook Islands. The coin obverse reads cook islands but the certificate says “Tuvalu.” Perth Mint officials say the discrepancy results from a marketing error, not an error during production.

Coin loaned for photography by www.TalismanCoins.com. 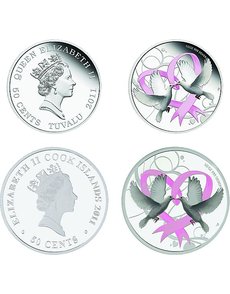 A new collector coin from the Perth Mint was issued for the Cook Islands, after being planned as a coin for Tuvalu. Computer-generated publicity images of the Tuvalu coin, top, contrast with images of the actual coin, as struck, for Cook Islands.

Although the Cook Islands and Tuvalu are hundreds of miles apart, a coin has now linked them.

In an apparent marketing mix-up, the Perth Mint has issued a coin for the Cook Islands that was originally intended to be issued for Tuvalu.

The mix-up reveals inside details about how world mints contract for coinage issues from far-flung nations like Tuvalu and Cook Islands.

When released Jan. 4, the Cook Islands Proof silver 50-cent coin was identified by the Perth Mint in marketing materials and at its Web site (www.perthmint.com.au) as a dollar coin from Tuvalu with a theme of Love.

The coin features two doves in the foreground with a pink ribbon in the shape of a heart in the background.

The theme was never in doubt, but several weeks after the coin was released, Coin World learned about the mix-up from a longtime collector.

In checking into the collector inquiry, Coin World contacted Talisman Coins, the Perth Mint’s official North American distributor, which spot-checked its inventory and found that all of the coins read cook islands on the obverse instead of tuvalu.

The certificate issued with the coins, however, represented the coin as an issue of Tuvalu.

At first glance, that suggested that the coin was either a mule or a die production error. A mule results from a pairing of dies not intended to be used together.

Perth Mint officials admit that they performed well below expectation, but said the coin is not a mule.

The Perth Mint had not previously issued a half-ounce silver 50-cent coin for the Cook Islands, suggesting that an error was made with the country name during the production of the die.

Ron Currie, sales and marketing director for the Perth Mint, said neither scenario was correct.

The coin was originally planned to be issued under the authority of Tuvalu, and aimed at the Russian and Australian markets, he said.

“After feedback from our client in Russia we changed it to a Cook Island coin. Unfortunately and embarrassingly all the marketing material continued to be processed as a Tuvalu coin.

“On realizing it was the wrong collateral material we reprinted the certificates and changed all the references to it being a Tuvalu coin,” Currie said. “At no time did we produce a Tuvalu coin so there are no coin errors, only collateral marketing errors.”

The coin would have been a half-ounce silver coin, regardless of which legal tender authority the Perth Mint had used, Currie said.

The Perth Mint has reprinted the certificates and they are available to distributors who request them, Lucchesi said.

The coin’s 7,500 mintage limit sold out quickly, and the issue was declared “sold out” sometime between Feb. 22 and March 3, once delivery of the coins was completed.

Currie said the error should be a one-time event.

“You can be assured that procedures have been changed to prevent such an occurrence happening in future,” he said.

The Cook Islands is a group of 15 islands in the South Pacific Ocean northeast of New Zealand; Tuvalu is a sparsely populated island nation in Polynesia, midway between Australia and Hawaii.