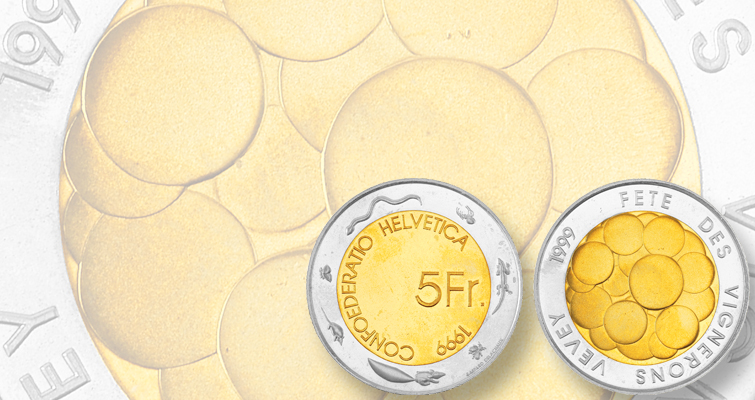 This 1999 5-franc coin celebrates the Swiss wine festival held once every generation. In addition to grapes, the design includes a procession of creatures found in a vineyard. 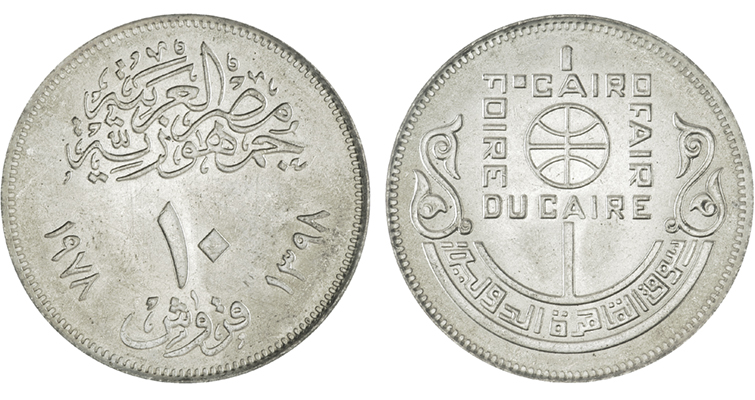 The Cairo International Fair annually promotes crafts and international trade. It is featured on a 1978 Egyptian 10-piastre coin. 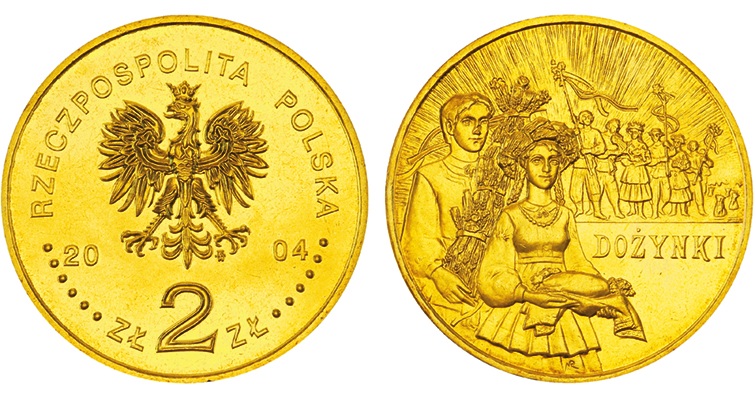 The grain harvest festival called Dozynki is 1,000 years old and is celebrated in Polish communities worldwide. It is honored on a 2004 Polish 2-zloty coin. 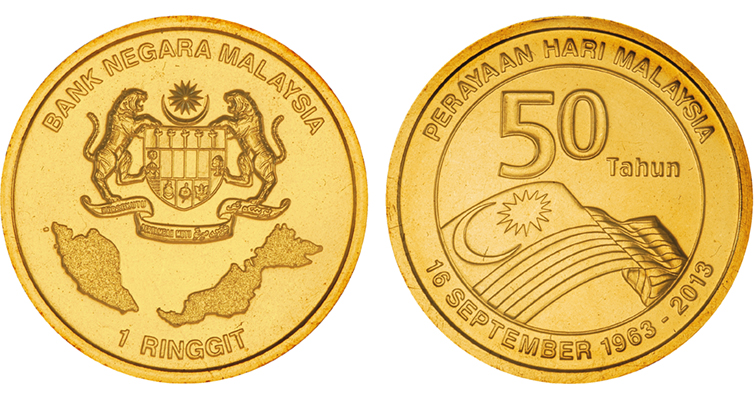 In Malaysia, the population celebrates both an independence day and a formation day when four countries became one. This 1-ringgit coin honors the 50th anniversary of Malaysia Day. 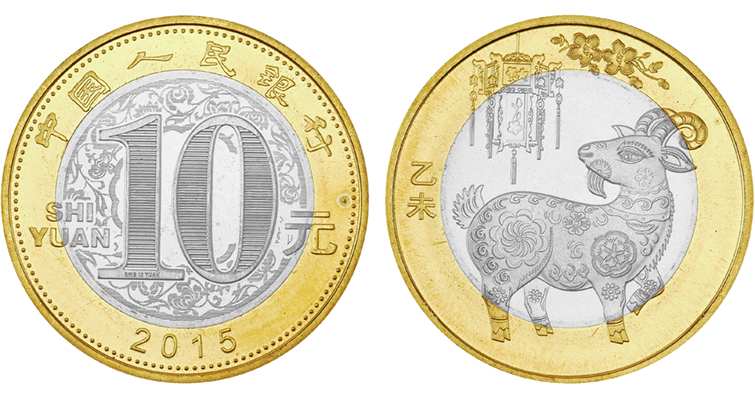 The ancient Chinese Festival of the Lantern is held during the Chinese New Year to celebrate the new year’s fresh start. In Hong Kong, it has evolved into a kind of Valentine’s Day. It is commemorated on a 2015 ringed-bimetallic 10-yuan coin. 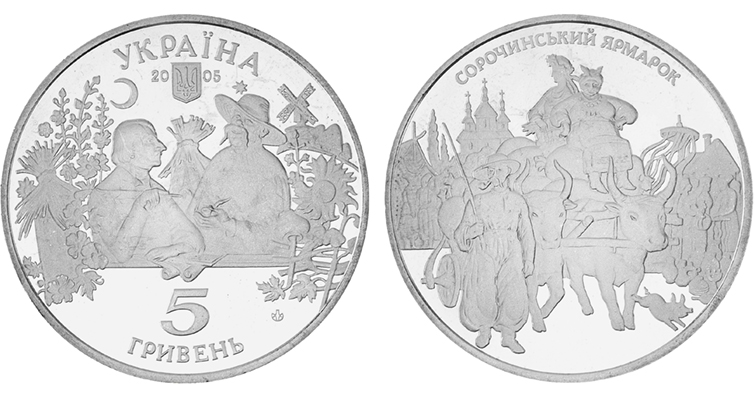 The Sorochynsky Fair is the theme of this 2005 5-hryvnia coin. It is an open air trade and cultural festival in Ukraine that attracts half a million people each year. 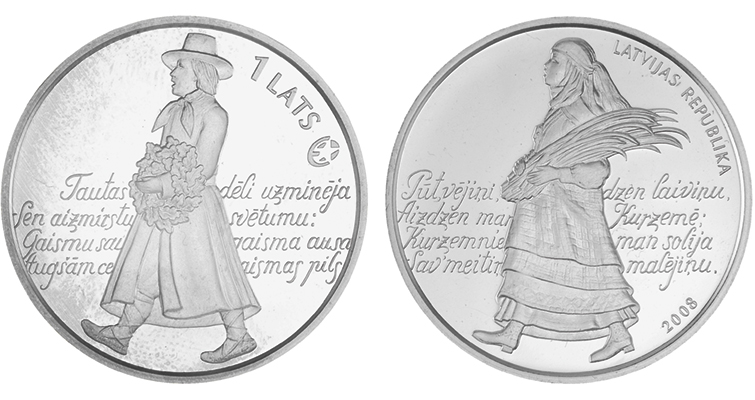 The Latvian National Song Festival has been going on since 1873. Tens of thousands of people participate each year in the events with singing, dances and processions. The illustrated 2008 1-lats coin captures the celebration. 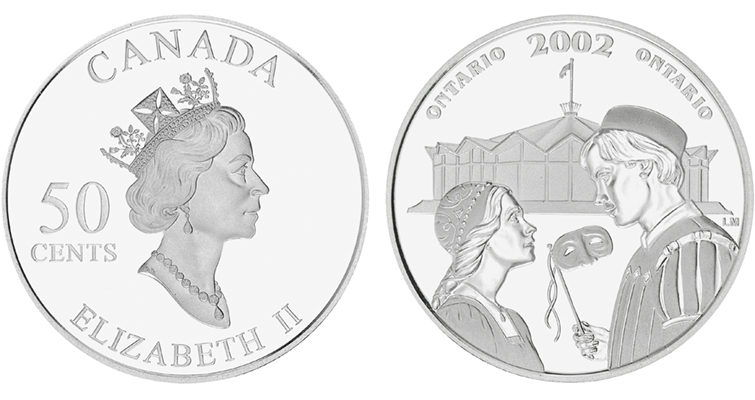 Humans love to party. Every nation on Earth has annual festivals and many of these are commemorated on coins. Among celebrations depicted, best known to world coin collectors are the independence days and religious holidays of other nations, but coins also depict celebrations about trade, harvests, wine-making, drama, song, crafts, and more.

The 1999 ringed-bimetallic Swiss 5-franc commemorative coin tells the story of a regional event, the Winegrowers Festival. This has been held in Vevey, Switzerland, since 1797 but is only celebrated once per generation, every 20 to 25 years. The region’s wine-making culture is feted for two weeks using a giant arena that seats 16,000 people, built anew for each festival.

The Wine Festival coin has a close-up of grapes on one side while the ring on the other side contains a whimsical circular procession of creatures found in the vineyards: honeybee, lizard, spider, snake, butterfly, mouse, and squirrel.

It has only been an official celebration in Poland since 1929. However, Dozynki has been going on each autumn for 1,000 years. Highlights include the consumption of traditional dishes and beer, and lots of singing and dancing. Happily for those who cannot travel to Europe this fall, Polish communities all over North America have their own Dozynki parties.

An Egyptian 10-piastre coin from 1978 commemorates an important business event held annually in Cairo that is also a celebration of Egyptian culture.

Many people are familiar with the Chinese zodiac or lunar year calendar featuring the 12 repeating animals. 2015 is the Year of the Goat.

There is also a celebration called the Festival of the Lantern that occurs during the Chinese New Year, usually in February or March. It has a history almost 2,000 years old. The Year of the Goat and the Lantern Festival were both honored on a 2015 Chinese ringed-bimetallic 10-yuan coin.

The lantern shown on this ringed-bimetallic coin, hanging above the goat, is a typical form. These lucky red paper lanterns symbolize a fresh start. In Hong Kong, this festival has evolved into their equivalent of Valentine’s Day.

Does the date Aug. 21, 1959, mean anything to you? This is the date that the United States added its 50th and final state and became the nation we know today. Our Independence Day, July 4, 1776, is much better known to Americans. It’s different in Malaysia, where both independence day and the date of the nation’s formation are celebrated.

Independence Day in August celebrates freedom from British colonial rule in 1957. Malaysia Day in September honors the formation of Malaysia from four other nations in 1963. Celebrating both events is very important to Malaysians. This 2013 1-ringgit coin honors the 50th anniversary of Malaysia Day.

The Sorochynsky Fair is the theme of a 2005 5-hryvnia Ukrainian coin. This open air trade festival in Ukraine attracts half a million people and more than 1,000 exhibitors each year in August with activities, folk music, dancing and food. Exhibits range from industry and crafts to the history and culture of Ukraine. The fair has been going on annually since the 18th century.

The Latvian National Song Festival began in 1873. Tens of thousands of people participate each year in the events, with singing, dances and processions. The Latvian people believe that the “spirit of singing” has saved them again and again from oppression. The folder that comes with this 2008 Latvian Song Festival 1-lats commemorative coin states: “The Song Festival tends to move people to tears and makes them contemplate eternal values.”

This 2002 Canadian silver 50-cent coin celebrates Ontario’s annual Stratford Festival that lasts for six months each year starting in April. The festival’s primary mandate is to present productions of William Shakespeare’s plays, but it also produces a wide variety of theater from Greek tragedy to contemporary works. The festival attracts many tourists from Great Britain and the United States, and is a very important part of Stratford’s economy. Stratford-upon-Avon is the name of the British town where Shakespeare was born and where he died. 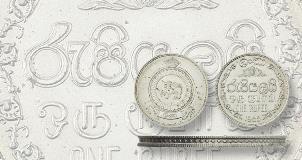 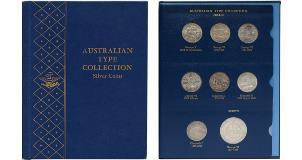 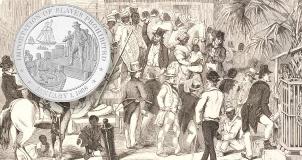