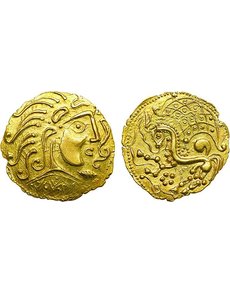 A collection of Celtic gold is being offered at auction by Ira & Larry Goldberg, Auctioneers.

The Cernunnos Collection of Celtic Gold will be auctioned on Sept. 6 at 9 a.m. during the ancient and world coin portion of the firm’s Sept. 4 to 6 Pre-Long Beach Auction in Los Angeles, CA.

The Cernunnos Collection, more than 40 years in the making, contains many rare and important Celtic coins, including a run of Parisii gold coins; several British coins, including the exceptionally rare staters of Tincomaros and Diras, which rank among the finest known; and numerous unpublished coins, among which is an apparently unrecorded stater imitating Lysimachos types.

A highlight of the auction is the gold stater of the Parisii people in north-central Gaul.

The coin, which weighs 7.03 grams and measures 25 millimeters in diameter, dates to the late second to early first century B.C.

In Extremely Fine condition, the coin has an estimate of $20,000 and up.

Online bidding is available through Goldberg Live Auctioneers and Icollector.com.

A catalog for the Cernunnos Collection may be viewed at the firm’s website, www.goldbergcoins.com.