Panama Canal opening 100 years ago marked by coin from Niue 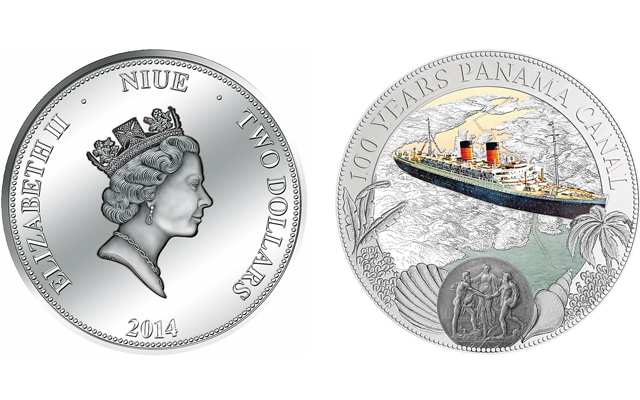 A new 2014 Prooflike silver $2 coin from Niue, issued through the Helvetic Mint, marks the centennial of the Panama Canal opening, on Aug. 15, 1914.

One hundred years ago, the Panama Canal opened, cutting shipping time drastically between the Atlantic and Pacific oceans and revolutionizing global commerce.

The Helvetic Mint, a private Swiss-based company, has announced a new Prooflike 2014 .999 fine silver coin for Niue to celebrate the anniversary. The coin, which weighs 50 grams and measures 50 millimeters in diameter, features a colorful printed scene of a ship (possibly the SS Ancon, the first vessel to officially traverse the canal).

Below the scene is a stylized image of the obverse of French artist Louis Oscar Roty’s medal honoring the completion of the canal. Palm leaves, shells and other nautical elements, and the inscription 100 YEARS PANAMA CANAL complete the reverse design.

The Panama Canal is a 48-mile-long (77.1-kilometer) ship canal in Panama that connects the Atlantic Ocean (via the Caribbean Sea) to the Pacific Ocean. The canal cuts across the Isthmus of Panama and is a key conduit for international maritime trade.

One of the largest and most difficult engineering projects ever undertaken, the Panama Canal shortcut greatly reduced the amount of time taken for ships to travel between the Atlantic and Pacific oceans, enabling them to avoid the lengthy, hazardous Cape Horn route around the southernmost tip of South America via the Drake Passage or Strait of Magellan.

In 1877 two engineers, Armand Reclus (an officer with the French Navy), and Lucien Napoléon Bonaparte Wyse, surveyed the route and published a French proposal for a canal. In 1881, the first attempt to construct a sea-level canal began under the leadership of Ferdinand de Lesseps, builder of the Suez Canal, but had to stop because of engineering problems and high mortality due to disease.

The United States took over the project in 1904, and took a decade to complete the canal, which was officially opened on Aug. 15, 1914

No U.S. distributor was established at publication time.