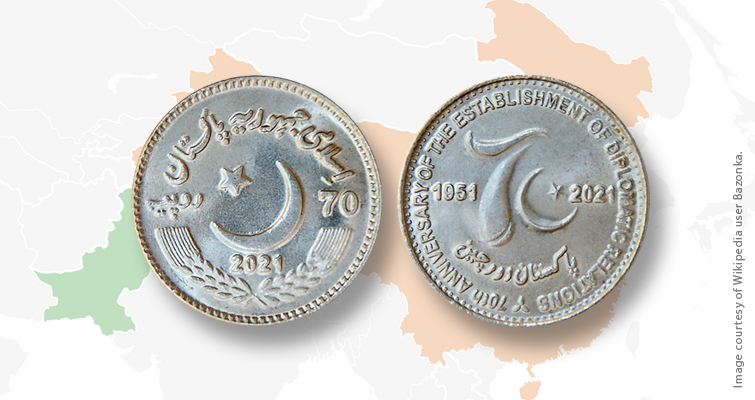 Pakistan marks its 70-year diplomatic relationship with China on a new circulating commemorative 70-rupee coin, apparently the first of that denomination.

Images courtesy of the State Bank of Pakistan.

Pakistan marks its diplomatic relationship with China on a new circulating commemorative 70-rupee coin, apparently the first of that denomination.

The denomination is a nod to the 70th anniversary of relations between the country, according to the State Bank of Pakistan. The relationship between Pakistan and China was established on May 21, 1951.

The copper-nickel coin was unveiled June 10 in the nation’s capital, Islamabad, and released through banks the following day.

The obverse of the coin depicts in the center a “waxing crescent moon,” open to the upper left, with a five-pointed star centered at the opening in the crescent, “facing northwest in rising position,” according to the bank. Above, wording in Urdu script translating to “Islami Jamhoria Pakistan” identifies the country, with year date 2021 and two sprigs of wheat below.

The face value of the coin, as a bold number 70 and “rupia” in Urdu script, appears divided, respectively at the right and left sides of the celestial device.

A logo related to the two nations’ diplomatic relationship appears on the reverse in the center, with the years 1951 and 2021.

The English wording 70TH ANNIVERSARY OF THE ESTABLISHMENT OF DIPLOMATIC RELATIONS is written all along the periphery and “Pakistan Aur China” is in Urdu script at the bottom of the logo.

The coin weighs 13 grams and measures 30 millimeters in diameter.

The Pakistan 70-rupee coin’s face value is equivalent to 43 cents U.S., as of Aug. 11 exchange rates.

Coins as propaganda nothing new

Pakistan has regularly issued coins celebrating its ties with China, including a 10-rupee coin in 2009 for the 60th anniversary of the People’s Republic of China, and a 20-rupee coin in 2011 for 60 years of diplomatic relations between the countries.
Connect with Coin World:
Sign up for our free eNewsletter
Access our Dealer Directory
Like us on Facebook
Follow us on Twitter

Collectors seeking to obtain the 2021 coin will have to search the secondary market. 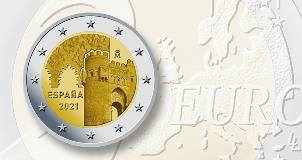 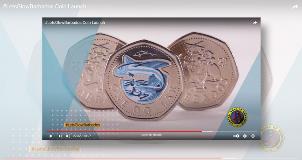