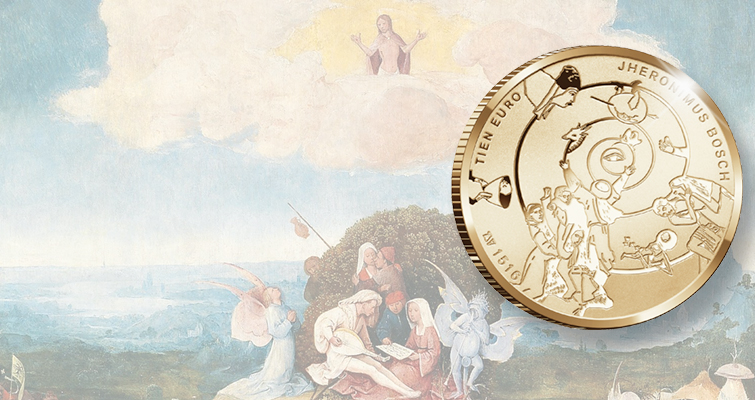 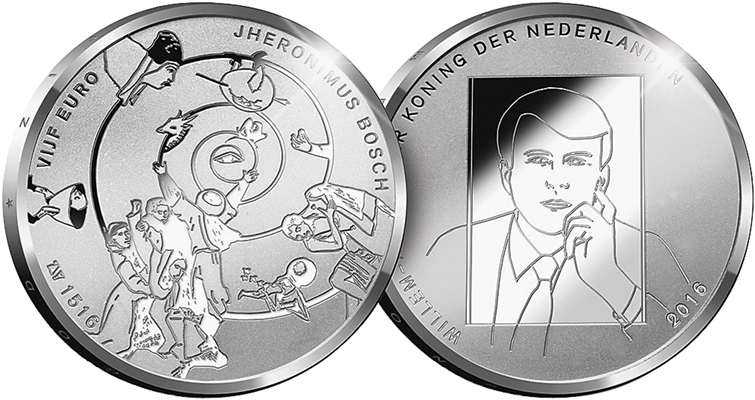 The works of Hieronymus Bosch appear on 2016 Netherlands coins, including the Proof .925 fine silver €5 version. 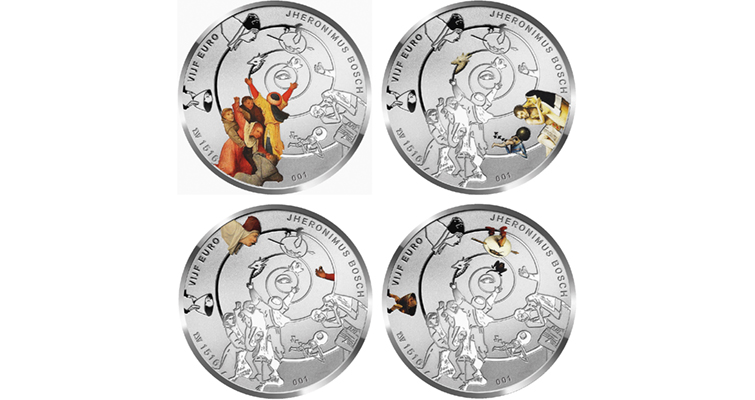 A special set of four coins features artwork by Jheronimus Bosch in color. The Proof .925 fine silver €5 coins are offered only in a limited edition set, with a mintage of 500 for each of the set's differently colorized but otherwise identical coins.

To make new coins, the Royal Dutch Mint went back in time.

The Netherland’s second commemorative coin program of 2016 marks the 500th anniversary of the death of painter Jheronimus (Hieronymus) Bosch.

The coins are part of a larger program of festivities marking 2016 as the Year of Jheronimus Bosch.

Activities organized throughout the country honor the Dutch medieval painter who died in Den Bosch 500 years ago.

The painter, also known posthumously as Jeroen or Hieronymus Bosch, went down in history as “den duvelmakere” (the devil maker) and is particularly significant as an innovator of the existing visual tradition.

Characterized by a wealth of symbolism, imagination and riddles, his works are “full of illusions and hallucinations, bizarre monsters and devilish nightmares [that] depict the major themes of his time: seduction, sin and judgment,” according to the Jheronimus Bosch 500 Foundation. The foundation is responsible for developing and realizing the multiyear celebration of the anniversary.

The coins were revealed (and sales began) Aug. 23, with a ceremonial first striking event scheduled for Sept. 16.

Designed by Danielle van Vree, the shared reverse incorporate details from several of Bosch’s paintings. The design of each reverse is identical, but on the four versions with color, differing elements of the design are emphasized with color.

The portrait of King Willem-Alexander appears in outline on the obverse, with a squared-off central portion in mirror finish.

Multiple versions of the designs are available, with a Proof .900 fine gold €10 at the top of the ticket, so to speak.

Next is the Proof .925 fine silver €5 coin, which is available plain, or colorized four different ways in a four-coin set. The colorized coins are numbered, the first time that the Royal Dutch Mint has issued a numbered coin. Each coin in a set bears a matching number, matching also the set’s corresponding certificate of authenticity.

Wrapping up the program is the Brilliant Uncirculated silver-plated copper €5 version, which is available in a collector card or in rolls.

The Proof .925 fine silver €5 coins weigh 15.5 grams and measure 33 millimeters in diameter. The plain Proof version has a mintage limit of 10,000 pieces, while 2,000 colorized Proof coins are available only in the 500 colorized four-coin sets.

A Brilliant Uncirculated silver-plated copper €5 version  weighs 10.5 grams and measures 29 millimeters in diameter. It has a mintage limit of 158,000 pieces; 20-coin rolls of this version are available for 12.5 percent above face value, and 12,500 pieces are offered as single coins, in numbered coin cards, for €10 each.

Distributor Coin & Currency Institute offers three sales options from the Bosch program: The BU €5 coin in card is available for $19.95, the individual plain Proof silver coin is priced at $62.50, and the gold coin is available for $525.

To order the coins, visit the Coin & Currency Institute's website. 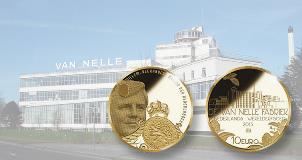 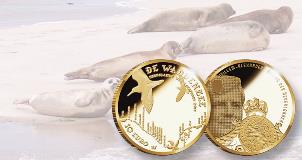