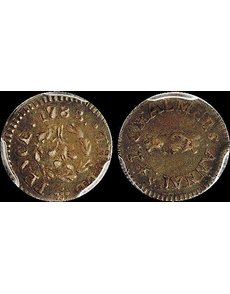 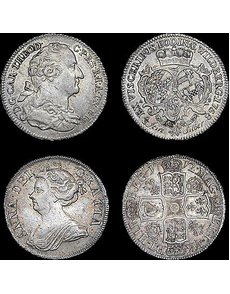 A hoard in a historic Philadelphia property included a 1783 Chalmers threepence graded About Uncirculated 53+ by Professional Coin Grading Service that sold for $37,375 in an Oct. 10 auction. 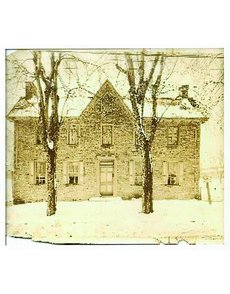 A hoard U.S. and world coins was discovered in this 19th century Philadelphia-area toll house.

That foreign currency was in abundant use during Colonial and early American times is well known to many coin collectors.

But Helene Rodgers of the Philadelphia area is not a collector. She had little inkling of what was in a collection of several hundred coins her father found on a historic property where a 19th century livery and toll house once operated.

Besides U.S. silver dollars and other U.S. coinage, the hoard included a rare 1783 Chalmers threepence that sold in an October auction for $37,375. Other items in the hoard include coins from Austria, England, France, Germany, Russia and South America, which were sold by Dix Noonan Webb in a Dec. 6 auction.

In the early 1940s the family bought the historic property, which sits on a land tract granted by William Penn in 1708. The property includes a livery stable and small residence that were built in the early 1720s. A house added in 1795 is where Rodgers lives today.

“I was four years old when we moved here,” Rodgers said.

In 1811, an act was passed that led to the creation of a toll road from Philadelphia to Reading, and the toll house soon began its operation.

Rodgers believes her father found the coins during his renovations, which were fueled by his interest in amateur (or “ham”) radio.

“He was always knocking out things to make room for his [radio] stuff,” Rodgers said. “They [the coins] just started showing up.”

The coins could have been inside a walk-in fireplace that was hidden by a wall created by an earlier owner. Rodgers’ father took out the wall, bringing the fireplace out of hiding.

“We often wondered if he found some of the coins in there,” she said. “I think that’s when a lot of the stuff showed.”

The coins were apparently derived from tolls or livery fare, and after finding them, her father kept them until his death in 1996. They have remained safely secured since then.

Early this year Rodgers and her daughter Donna Polkowski began trying to identify the various pieces in the collection of hundreds of coins and a few tokens and medals.

“We’re not coin people, so our friend suggested we get in touch with someone they knew, a past president of a local coin club,” Rodgers said.

They were directed to Charles Atkinson, who began collecting coins 62 years ago and has been selling coins for about a decade.

Atkinson has a booth at Shupp’s Grove Antique Market in Adamstown, Pa., where he has sold and will continue to offer the U.S. coins and some world material from the Rodgers estate. He’s already sold many U.S. silver dollars, and hopes to have the rest of the collection sorted, cataloged and in his booth by the end of April, he said.

“It’s been a lot of fun,” Atkinson said. “There’s stuff in there I would have loved to have myself.”

The keystone of the hoard is the 1783 Chalmers threepence that was graded About Uncirculated 53+ by Professional Coin Grading Service and stickered by Certified Coin Acceptance. It was auctioned Oct. 10 by Legend-Morphy Auctions for $37,375, including the 15 percent buyer’s fee.

The rewards haven’t merely been financial.

Polkowski said the reason it has taken so long to prepare the collection for sale is the identification process. She sorts items from the collection into those she can or cannot identify, and has been become more adept though she still requires Atkinson’s assistance with many of the coins.

“It’s been a load and a half, and the education has been phenomenal,” Polkowski said.

When neither could identify the pieces, Atkinson has submitted them to auction houses, including Dix Noonan Webb. Atkinson convinced Rodgers to attend the American Numismatic Association World’s Fair of Money in Philadelphia in August, where they met with DNW’s Chris Webb and consigned several dozen coins and a medal.

None of the Toll House Collection pieces in that sale are classed as extremely rare or expensive; the leading two lots found by Rodgers were a 1712 silver halfcrown of English Queen Anne and a 1758 silver gulden of the Duchy of Jülich-Berg in modern-day Germany and Netherlands. Both coins are in Nearly Extremely Fine condition and each had an estimate of £200 to £250 (about $320 to $400 U.S.). The halfcrown realized £600 (about $966 U.S.), and the gulden realized £516 (about $831 U.S.), both prices including the 20 percent buyer’s fee.

Rodgers doesn’t have an exact count of the number of coins that were found because the collection is still being assessed. “We still have foreign coins we haven’t gone through.”

Whatever they find Rodgers and Polkowski will gladly relinquish to the hobby fraternity.

“We are not collectors; we want collectors to be able to enjoy these coins,” Rodgers said. “Someone needs to appreciate them — they need to go back to collectors; they are just sitting in a box.”