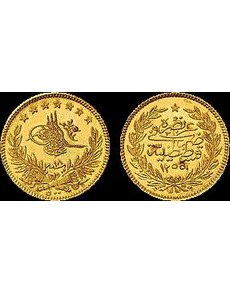 An 1845 gold 500-kurush coin highlights the Dec. 12 auction of the first part of the Sultan Collection of Coins of the Ottoman Empire. Fritz Rudolph Künker is conducting the sale.

The Dec. 12 auction of part one of the Sultan Collection of Coins of the Ottoman Empire features 908 lots. The collection, built over 30 years of collecting, reflects the history of coins of the last six Ottoman sultans, continuing beyond the monetary reform of 1845 through the early 20th century.

The Ottoman Empire, one of the largest and longest-lasting empires in the world, was at the center of interactions between the Eastern and Western worlds for more than 600 years. However, several setbacks during its last 90 years or so vexed the leadership despite efforts at Western reform, and finally in late 1918 it dissolved.

When Abdülmecid I took office July 1, 1839, his father, Mahmud II, had already laid a foundation for modernization with legal and military reforms; his son had only to implement the reforms. In addition to reorganizing the army, introducing a new civil code and penal law, among other reforms, was a financial reform to counter a steadily declining currency.

As late as the reign of Mahmud II the Ottoman Empire had no common currency, and foreign coins and paper money (including the Austrian Maria Theresa taler) dominated daily life. “The system was complicated but well-practised,” according to the auction house, and money-changers made good business.

As a first step toward getting the population used to a common currency, officials issued 500-piaster and 1,000-piaster state debentures, a form of paper money returning annual interest of 12.5 percent,

The empire then adopted a monetary reform based on the French model and the Latin Monetary Union, introducing a bimetallic system of gold and silver coins. Among the coins introduced was a gold 100-kurush piece of 100 piaster, known as the livre turque, and the silver medschidije. Fractional silver and copper coins were also part of the system. The coins were produced by French and English minting technicians in a new mint, operated by steam power and equipped with English machines, that had been built below the Topkapi Palace in Istanbul (Constantinople).

The new stable currency eased trade with and expanded credit for the Ottoman Empire, and while trade flourished, debt increased and in 1881 the empire was forced to form a state agency to handle its debt .

The complete catalog may be viewed online through the firm’s website, www.kuenker.de, or through www.sixbid.com.

All successful lots are subject to a 15 percent buyer’s fee.