One year out, Royal Mint continues countdown to Olympics 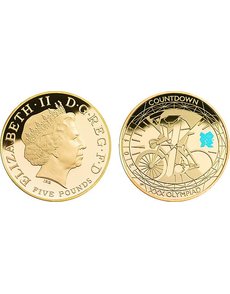 The Royal Mint in Britain continues the countdown to the London 2012 Summer Olympic and Paralympic Games with coins. The latest Countdown coin release comes with just one year before the contests begin, and includes the Proof .9167 fine gold £5 version seen here.

One year before the world focuses its attention on London for the 2012 Olympic Games, the Royal Mint has issued the latest commemorative coins counting down until the big day.

More than 10,000 athletes from around the world are expected to compete in the Summer Games, with another 4,200 in the Paralympic Games, representing 205 countries, when the Olympic Games begin July 27.

Britain’s Royal Mint recently released the third annual issue in its four-year Countdown to London series, each issue containing four £5 coins counting down the year as the Games approach.

Each year, four different versions are being offered of the year’s design: a Brilliant Uncirculated copper-nickel version, two Proof .925 fine silver versions and a Proof .9167 fine gold coin. One of the silver coins is a piedfort, or double-thick version.

Reverse designs of the coins depict athletes engaged in a specific sport. A cycling design is featured on the 2011 coins; a track and field design was used on the 2010 coins; and the 2009 coins feature swimmers. The coins in the yet-to-be-released fourth issue will show three athletes on a podium.

All of the coins in all of the issues share certain design elements, some unchanging from annual issue to annual issue, and others changing to reflect the passage of time as the 2012 London Games approach.

The “counting down” is achieved with two design elements that are changed annually.

The general design also contains a clock face, with a more detailed quarter segment showing an indicator ticking down as the Games approach. The indicator on the 2009 coins is positioned to the right. The clock hand is moved into a new position on each year’s coins, approaching the 12 o’clock position to signify the approach of the Games.

A bird’s-eye view of the outer framework of the Olympic Stadium encircling the main design is an unchanging element. The London 2012 logo also reappears as part of each reverse design, but repositioned from year to year into the field of the design behind the athletes, and is colored blue on the silver and gold versions.

The reverses of all four years’ issues were designed by Claire Aldridge, and are paired with the Ian Rank-Broadley effigy of Queen Elizabeth II on the obverse.

All four of the coins are 38.61 millimeters in diameter, but their weights differ. The copper-nickel coin and the standard Proof .925 fine silver coin each weigh 28.28 grams, the Piedfort silver coin weighs 56.56 grams, and the gold coin weighs 39.94 grams.

The four coins have multiple packaging options, limits and prices.

The BU 2011 coin has a mintage limit of 250,000 pieces, regardless of how it is distributed. The coin is available at face value to customers in the United Kingdom only and packaged in a display card. In addition, a slightly different package (showing the velodrome where cycling contests will take place) houses BU examples that are available for £9.99 (it is not clear whether the quality differs between both BU versions). Also, a three-coin set comprising BU examples of the first three Countdown coins is available for £28.49, and is delivered inside an illustrated box with room to add the 2012 BU example when it becomes available.