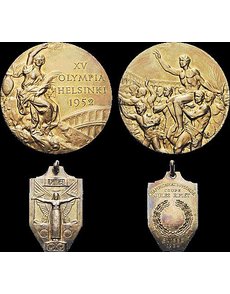 The 1952 Olympic gold medal and 1954 FIFA World Cup silver medal were earned by László Budai, a member of Hungary’s famed “Mighty Magyars” team, which was undefeated for 32 consecutive regular matches from May 14, 1950, until losing the FIFA World Cup to Germany by a 3-2 score, in Bern on July 4, 1954. The Hungarian team defeated Yugoslavia 2-0 in 1952 in Helsinki to win Olympic gold.

According to Rapp, Germans today recall the time when the national team defeated the heavily favored Hungarians at Wankdorf Stadium. The unexpected victory (the Germans were losing 2-0 before their turnaround) is sometimes referred to as the true beginning of the German Wirtschaftswunder (economic miracle), because the euphoria it triggered in Germany ended the resignation after World War II.

The Mighty Magyars, which had also won the 1953 European Cup, took the loss against Germany but rebounded and began another streak that continued until 1956 when the team lost to Turkey.

The 1952 Olympic gold medal was designed by the Italian artist Giuseppe Cassioli and Finland’s Aukusti Tuhka.

The medal’s obverse shows a seated Victoria holding the victor’s laurels aloft in her right hand and cradling the victor’s palm branch in her left arm. A colosseum appears in the background.

On the reverse, males in heroic nudity carry the likewise naked victor on their shoulders. The victor holds the palm branch in his left hand and has raised his right one, gesturing to the crowd.

The gold medal is actually composed of gilded silver from metal donated by the Finnish steel producer Vuoksenniska Oy. The medal was manufactured by jewelry producer Kultakeskus Oy.

Considerably smaller is the silver medal that was awarded in 1954 in Hungary. Even though Budai didn’t take part in the final, he received one of the sought-after decorations for being a team member.

The obverse shows an Egyptian-like goddess Victory with wings, below the inscription FIFA. Victory holds victor’s palms in both hands and stands on a pedestal with the two hemispheres of a globe on it. The Victory figure and associated elements represent the Coupe Jules Rimet, the actual award presented to the world champion until 1970 (a new version of the award was introduced for the 1974 games). The trophy was named in 1950 in honor of World Cup founder Jules Rimet. Victory holds a victor’s laurel in each hand, raising them above her head; additional laurels, both in the shape of a wreath and a branch, rest in a small niche in front of which Victory appears. Two footballs are depicted In the lower third of the medal.

The reverse shows an oak wreath and the inscription “World Championship” in French above, below COUPE JULES RIMET, FIFA PRESIDENT 1921-1954. Below are the venue and year, with PEKA and 0,923 (indicating the silver content) punched in.

After Communists assumed power in Hungary, Budai, who had been playing for a victorious Budapest team, was signed for Honvéd. Honvéd was the football club of the Hungarian army, which permitted its players to concentrate entirely on their athletic training and not regular military duties. In this club, Budai played together with Ferenc Puskás, Sándor Kocsis, József Bozsik and Zoltán Czibor, who formed the backbone of the “Golden Team,” nicknamed “Mighty Magyars” in English-speaking areas.

Budai died in 1983 and today is remembered at a stadium in Budapest that bears his name.

For much of the firm’s more than 40 years, Rapp specialized in philately (stamps) but in recent years has extended its expertise to coins.

Based in the small city of Wil in Switzerland, the firm claims to be one of the 10 largest auction houses for philately in the world. The firm’s sales concept is to offer select items as single lots, while everything else — including countless objects that many other auction houses would sell individually — is left as collections with minimum bids of 20 percent of their estimate.

This sale is the first time the firm has published a separate catalog of its numismatic auction items.

Highlights from the Nov. 22 auction include a collection of more than 2,000 coins from the 13th to the 20th centuries, from the Holy Roman Empire and the region it once resided in, offered as one single lot. Among them are more than 90 gold coins containing cumulatively approximately 740 grams of fine gold. The auction also contains a taler series from the 18th and 19th centuries, fractional taler pieces organized by year, medals, decorations and much more. The 2,000 coins have an opening bid of 15,000 Swiss francs ($16,342 U.S.).

Another lot offers a collection of 75 gold coins from Great Britain, struck between 1873 and 1986, whose minimum bid of 4,000 Swiss francs ($4,358 U.S.) is about 10 percent of the intrinsic metal value alone, not even factoring their coins’ collector value.

Though the firm acknowledges that most of the lots will sell for far more than their minimum price, “Nevertheless, there is always the tantalising chance that a bidder may succeed in clinching a real deal on a lot or two.”

The catalog with complete lot listings is posted at the firm’s website, www.rapp-auktionen.ch.

A 20 percent buyer’s fee applies to all successful bids. ¦