Not as old as owner thought 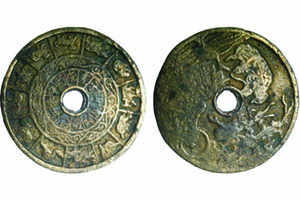 One side of this Chinese charm carries a very common theme for charms, the 12 animals of the Lunar Zodiac calendar, but determining what is represented on the other side will require research, dealer Scott Semans said.

My grandparents were world travelers. They have an item that seems to be extremely rare that has a hole in it.

From the description inside the box it came in, the piece seems to be from 50 B.C. However, after doing some research, it doesn’t seem to match up. I think it seems to be from the Shui Nationality.

Mr. Capp provided images of an item that is a Chinese brass charm, likely of the late Qing Dynasty (1800s), according to dealer Scott Semans of www.CoinCoin.com.

Condition on the charm is “not good — it’s been cleaned in the past, partly retoned — [and] would retail maybe $15 to $20 or so,” according to Semans.

The medal is uniface and appears to be made out of copper, but I do not know for sure.

Cardinal Richelieu was a very influential and powerful cardinal. I would appreciate any information that you might have on this medal.

Unfortunately the reader could not provide images of the medal in question, but correctly notes that the cardinal (real name Armand-Jean du Plessis) left his mark on 17th century politics of France.

Many medals depict Cardinal Richelieu, but we did not find any that are uniface.

This medal’s legend matches that of one inset in the cover of each volume of a 20-volume work, The Immortals: Masterpieces of French Fiction Crowned by the French Academy. According to Ziern-Hanon Galleries in St. Louis, the reverse of the medal cannot be checked to see if it is uniface without perhaps destroying the cover.

Coin World columnist David T. Alexander, a medal specialist, notes that there are modern and historic French Mint versions of medals for Cardinal Richelieu but more information and images are required to satisfy this inquiry.