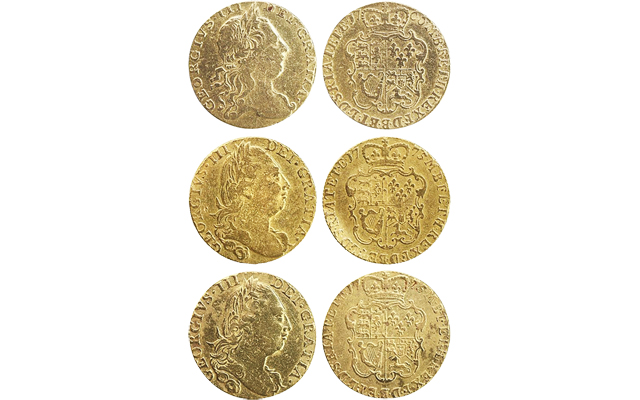 Three gold guineas of George III are offered for sale in Daniel Frank Sedwick LLC’s May 1 and 2, 2014, auction. All of the coins, graded Extremely Fine, come from the Halsewell, a British vessel lost in a 1786 shipwreck. 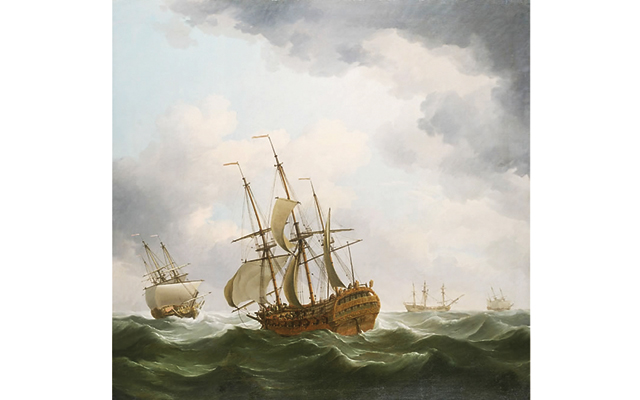 Circa 1759 painting shows an East Indiaman ship similar to the Halsewell, which wrecked off Dorset, England, in 1786.

Few coins are as alluring to collectors and noncollectors alike as those that are recovered from shipwrecks.

Literature abounds with tales of pirate treasure, gold doubloons, booty and the like, catching the interest of even the casual hobbyist. In these stories, and popular lore, we usually think of shipwreck coins as Spanish in origin, but that is not always so.

Ships of many nations plied the waters of any number of trade routes and encountered many of the same hazards — rocks, weather, predatory attack — regardless of the flag under which they sailed.

A trio of English gold coins, all recovered from the wreck of the Halsewell, have the allure of gold coins collected from the ocean floor. All three coins are being offered in Daniel Frank Sedwick LLC’s treasure auction No. 15, which closes live at the firm’s website May 1 and 2, 2014.

Over the past seven years, the Sedwick firm has helped to stoke the market for shipwreck coins by publishing wreck histories in each auction catalog, bringing greater awareness of the vast array of shipwrecks outside of the few well-known wrecks like the 1622 Nuestra Senora de Atocha and the 1715 Spanish Plate Fleet wrecks.

The British vessel Halsewell wrecked off the coast of Dorset, England, on Jan. 6, 1786, sending some 170 individuals to rest forever in the icy depths of the English Channel.

The East Indiaman ship was departing London and bound for Madras, India. Capt. Richard Pierce commanded the ship for its brief, eight-year life (and in fact, legend has it, had planned to retire following the conclusion of the trip).

For a few days before the ship’s demise, a winter storm and leaks challenged the crew, but ultimately the ship sank after striking rocks along the English coast. A reported 74 individuals survived.

The wreck even inspired author Charles Dickens to write the short story “The Long Voyage.”

In 1967, according to the Dorset Life newspaper, divers recovered coins and other artifacts from the wreck off the treacherous shore.

Each of the three gold guinea coins offered in Sedwick’s auction is accompanied by a certificate from the salvors.

All three coins show a portrait of George III. One of the coins is dated 1766, and another is 1775. The third is an apparently a previously unreported variety, having the overdate of 1775/2.

Though all three are graded Extremely Fine, their conditions vary slightly, with the 1775 coin exhibiting “muted luster” and the overdate issue featuring a small bend on the edge. The 1766 coin has a “hint of luster” and some scratches.

Each of the three coins is estimated to sell for between $700 and $1,000, meaning that gold coins from a shipwreck — of English origin, to boot — are within reach for many collectors.