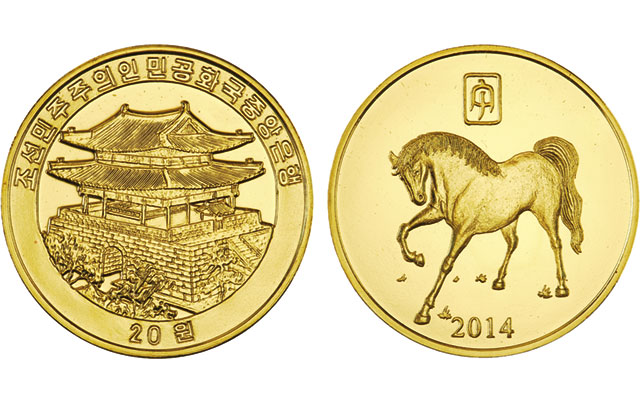 A 2014-dated 20-won coin showing a horse may have been issued to commemorate the Year of the Horse in the Chinese Lunar Zodiac calendar.

North Korea is famously secretive and closed to the West, but one coin dealer at the World Money Fair in Berlin had obtained modern North Korean coins to sell to collectors.

A German company, Oulong GMBH, offered about three dozen base metal coins, each bearing different designs, for €5 each (with discounts for quantity purchases).

The coins appeared to be denominated 20 won. All the same size, but their exact metal content is unknown.

For a nation famously bereft of consumer goods, material for minting coins seems in ready supply, given the abundance of coin types from releases in the past three years that were on display at the Oulong booth. Designs included several animals, with a horse design on a 2014 coin presumably marking the 2014 Year of the Horse in the Chinese Lunar zodiac calendar.

The booth's proprietor, who would not disclose his name, said he obtained the coins from the mint when they set up during the Singapore International Coin Fair, which is operated by a Singapore subsidiary of American company PandaAmerica.

The Standard Catalog of World Coins, 1901 to 2000, by Chester Krause and Clifford Mishler, lists a mint located in Pyongyang, and the official name of the trading company for the mint is Korea Pugang Coins Corp., which was set up at the 2013 and 2014 Singapore shows.

Whether purchased directly or indirectly, the coins are illegal to own within the United States, as they violate trade sanctions imposed on the country.

That hasn’t stopped one American from snapping up the coins, according to the Wall Street Journal.

American investor Jim Rogers reportedly bought many of the silver and gold coins available during the 2013 Singapore show, per the WSJ report.

The coins are, however, legal to own, as long as they are held outside the United States; U.S. law prohibits the import of goods, services and technology from North Korea, but not outright ownership, so the Singapore-based Rogers is apparently not afoul of the law.