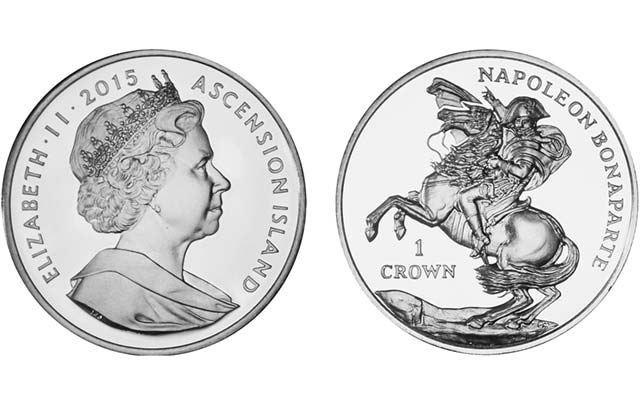 Napoleon Bonaparte was notable for his slight stature, but a new coin from the Pobjoy Mint aims to give the French leader a boost in size.

The Pobjoy Mint is issuing two high relief 1-crown coins the name of Ascension Island featuring Napoleon Bonaparte. The coin is being issued to mark the Bicentenary of the Battle of Waterloo.

The reverses of the coins share a design based a well-known portrait of Napoleon seated upon a rearing horse. The reverses are produced in high relief.

The obverses of the coins carry an effigy of Queen Elizabeth II by Ian Rank-Broadley.

Napoleon Bonaparte, also known as Napoleon I, was a French military leader and emperor who conquered much of Europe in the early 19th century.  Born on the island of Corsica, Napoleon rose quickly through the military ranks during the French Revolution. After seizing political power in France in 1799, he crowned himself Emperor in 1804.

Ambitious, shrewd and a skilled military strategist, he successfully waged war against various coalitions of European nations and expanded his empire. However, after a disastrous French invasion of Russia in 1812, Napoleon abdicated the throne two years later and was exiled to the island of Elba.

In February 1815, after less than a year in exile, Napoleon escaped Elba and sailed to France with a group of supporters. In March he returned to Paris where he was welcomed by cheering crowds. Louis XVIII fled and Napoleon began what became known as his Hundred Days campaign.

Upon his return to France, a coalition of allies (Austrians, British, Prussians and Russians), who considered the French Emperor an enemy began to prepare for war.

Napoleon raised a new army and planned to strike before the allies could launch a united attack against him. In June 1815, Napoleon’s forces invaded Belgium, where British and Prussian troops were stationed. Napoleon’s troops defeated the Prussians at the Battle of Ligny but two days later, on June 18, 1815, at the Battle of Waterloo, the French were crushed by the British with assistance from the Prussians. On June 22, 1815, Napoleon was once again forced to abdicate.

In October 1815, Napoleon was exiled to the remote, British-held island of St. Helena (which at the time was part of the British Overseas Territory that included Ascension Island).

The Proof high relief gold version is being marketed exclusively by Asset Marketing Services LLC, which operates www.govmint.com, in the United States.

The gold coin weighs 31.103 grams, measures 32.7 millimeters in diameter and has a mintage limit of 500 coins. Pricing information is not yet available.

To order the silver coin, visit the Pobjoy website.

Want to know about other Pobjoy Mint coins? Coin World has the coverage!