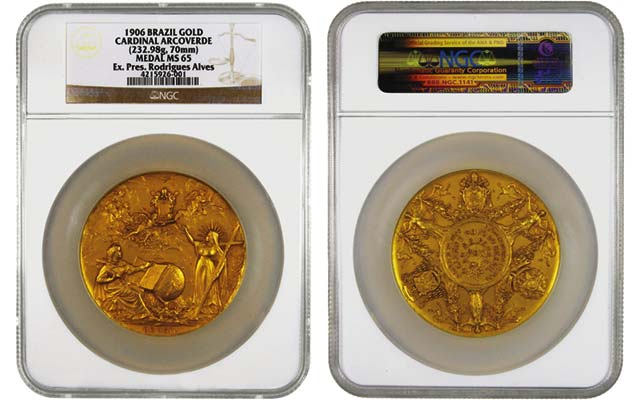 A gold medal presented to former Brazilian president Francisco de Paula Rodrigues Alves is one of three made and the only one available privately. The medal was recently graded and encapsulated by Numismatic Guaranty Corp.

Numismatic Guaranty Corporation has certified a rare and important 1906 Brazilian gold medal struck to commemorate the appointment of Archbishop of Rio de Janeiro Joaquim Arcoverde de Albuquerque Cavalcanti as Cardinal by Pope Pius X in 1905. This celebrated event marked the first time that a South American was appointed Cardinal by the Holy See.

The large gold medals presented to the Cardinal and the Pope are held by museums, which makes the President Alves specimen the only example available for collectors.

NGC has graded the President Alves example as Mint State 65. The large medal, which measures 70 millimeters in diameter and weighs 232.98 grams, is encapsulated in an NGC oversize holder.

Jeff Kahn, a dealer in rare gold medals, submitted this extraordinary piece to NGC for certification.

“Authentication and grading by NGC will give my clients confidence in the authenticity and preservation of this spectacularly beautiful historical medal,” says Kahn. “The NGC holder adds additional protection to ensure that this rare medal is properly protected for years to come.”

“We are honored to have had the opportunity to handle a medal that is not only extremely rare but also an important part of Brazilian and Catholic history,” says Jay Turner, NGC finalizer. “Beyond that, this stunning medal is truly a work of art.”