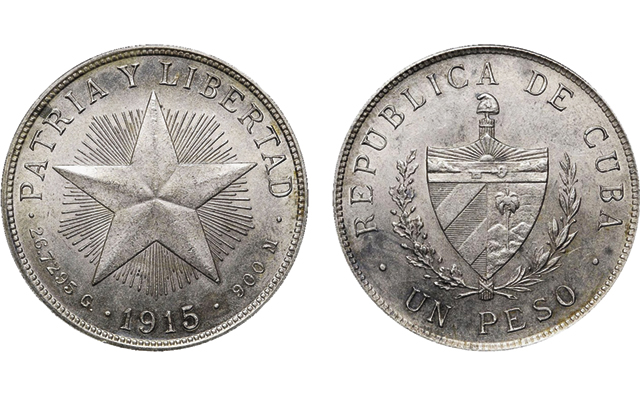 NGC posted an article last month about the first "high-quality" counterfeit of a 1915 Cuban silver peso that came to the grading service and how it differs from a genuine example.

The first "high-quality counterfeit” of a 1915 Cuban silver peso encountered by Numismatic Guaranty Corporation was the focus of a recently published article from the grading company.

Jay Turner wrote on May 19 about the counterfeit, which was created by a transfer die method but lacks the transferred contact marks that often signal a counterfeit coin.

"Unlike many other transfer die counterfeits coming from China, these Cuban fakes appear to have had most of the contact marks removed from the transfer die before production,” Turner writes, before noting the coin’s flaws. "There are still a number of issues that serve as diagnostics, including raised die lines, a few repeating marks, and various other transfer die defects.”

Those giveaways include the raised spikes on the top of the T in LIBERTAD, a hit on the I in PATRIA, and weakness of the right-side leaves on the coin's reverse. The counterfeits outed by NGC are without the luster of those coins they imitate, which were struck by the U.S. Mint.

"While poor quality counterfeit Cuban peso coins have been produced and sold at flea markets for years, this is the first high quality counterfeit of the Cuban 1915 Silver Peso we have encountered,” Turner writes. "With a catalog value in Krause of $1,200 in UNC and $8,500 in BU, a counterfeiter can profit greatly from producing a deceptive product.”

Cuban-coin collectors, be on notice.