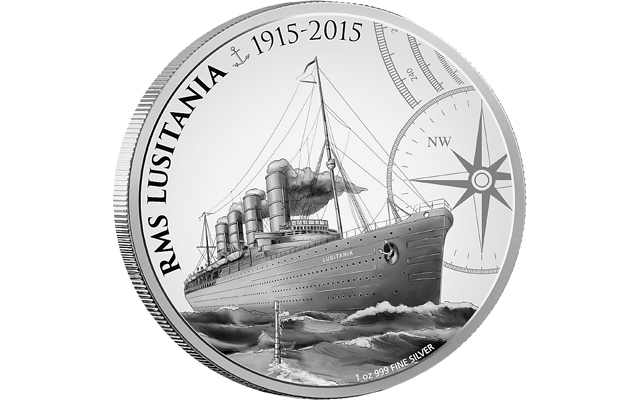 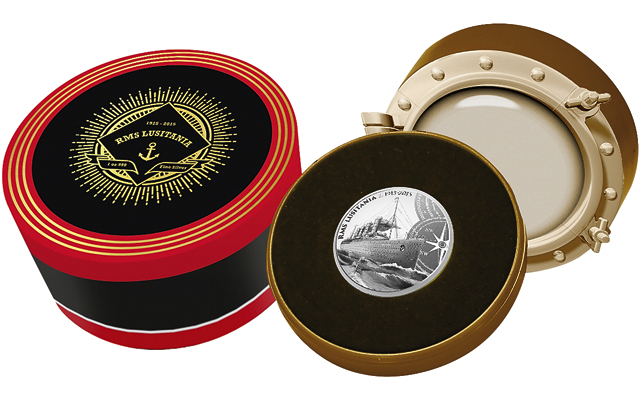 The Proof 2015 RMS Lusitania silver $2 coin from Niue is packaged in a case meant to evoke a porthole.

The flames of war were already raging in 1915, but the torpedo attack on the RMS Lusitania was a major incident among several that would lead America to join the war two years later.

The death of 128 Americans, among 1,198 total passengers and crew on a passenger ship sunk by German U-boat, was a major propaganda moment. Though the British-bound ocean liner was carrying munitions, the attack violated conventions of war.

The New Zealand Mint marks the centennial of the fateful May 7, 1915, attack with a Proof 2015 .999 fine silver $2 coin from Niue. The coin was announced (and sales began) May 7 and, the piece will become available May 26.

The reverse of the coin shows an engraved illustration of RMS Lusitania steaming across the Atlantic, with the periscope of the U-20 appearing in the foreground, portending the liner’s fate.

The coin weighs 1 ounce and measures 40 millimeters in diameter.

To learn more, or to order the coin, visit the New Zealand Mint website.