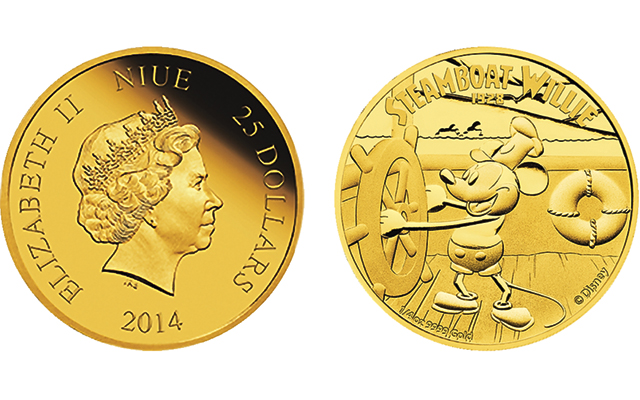 A quarter-ounce Proof .999 fine gold $25 coin commemorating Mickey Mouse may have sold out its mintage limit of 1,000 coins within hours of going on sale April 17. 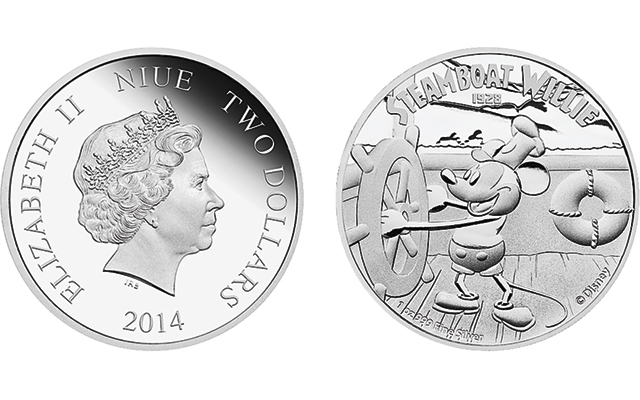 A 1-ounce Proof .999 fine silver $2 coin marking the 1928 production of Steamboat Willie shows Mickey Mouse, the character who debuted in that film and is now known worldwide.

The New Zealand Mint on April 17 launched its first silver and gold coins celebrating Disney characters, and within hours seems to have achieved a sellout for one of the coins.

The Proof quarter-ounce .999 fine gold $25 coin, one of two honoring the early Disney short "Steamboat Willie"(the first appearance of Mickey Mouse), may have sold out its 1,000 mintage limit within hours, as at press time neither the Perth Mint nor the New Zealand Mint had stock available. The Perth Mint listed the coin as “unavailable,” while the New Zealand Mint suggested that the item was “temporarily out of stock.”

Because of the time difference between countries, representatives had not been reached for comment about the sellout.

The Steamboat Willie coins — the program also includes a Proof 1-ounce .999 fine silver $2 coin — are the first in a series that will celebrate such famous characters as Donald Duck, Goofy, Pluto, Snow White, Cinderella, Ariel from The Little Mermaid, and Pocahontas.

New Zealand Mint, the Auckland-based gold bullion dealer­­ and collectible coin issuer, has a two-year license for the coins across the globe. The Perth Mint is striking the coins for the private New Zealand Mint, and both are offering them to collectors.

"Steamboat Willie" was the first film to feature Mickey Mouse and is regarded as a triumph in the history of animation.

The reverse of both coins features Mickey Mouse at the wheel of his handcrafte­­d ship. The inscription STEAMBOAT WILLIE 1928 completes the design.

In a press release, New Zealand Mint Chief Executive Simon Harding said, “Disney characters are known and loved the world over, so to be able to immortalise them on precious metals is something we expect will generate a lot of interest from fans all over the world.”

Issued as legal tender of the South Pacific island nation of Niue, all coins feature the Ian Rank-Broadley effigy of Queen Elizabeth II, the year-date and the monetary denomination on the obverse.

The gold coin weighs 7.777 grams and measures 20.6 millimeters in diameter.

The official release price for the gold coin is $755 in New Zealand funds; Perth Mint had offered it at $660.14 in U.S. funds before the mint halted sales (no price in U.S. dollars was available from the New Zealand Mint).

Prices may fluctuate with the exchange rates.

The Perth Mint is to begin delivery of the coins May 9, fulfilling orders in the order in which they were received.

To learn more or to order the coins, visit the websites of the New Zealand Mint, www.nzmint.com, or the Perth Mint, www.perthmint.com.au.