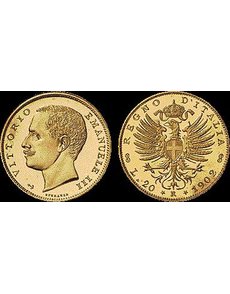 A 20th-century gold rarity from Italy leads all lots in the New York Sale’s Jan. 5 auction.

The Proof 1902 gold 20-lira coin, struck in Rome, is one of the major rarities of the 20th century. A tiny anchor to the lower left of King Vittorio Emanuele III on the obverse indicates the coin was made from gold mined in Eritrea (then an Italian colony), one of 115 such pieces.

Though it has a few “minute” hairlines, the coin is otherwise Fleur de Coin. It has an estimate of $50,000.

The coin is featured in the New York Sale’s auction XXVIII, one of three scheduled to be conducted during the New York International Numismatic Convention by the same group of dealers and auction houses. This auction offers ancient Greek, Roman, Byzantine and world coins.