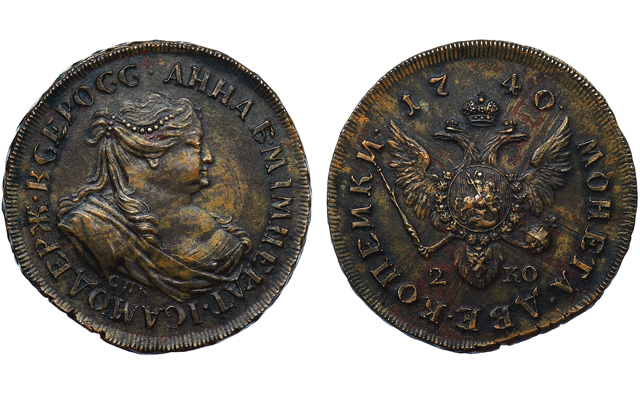 A rare bronze pattern 2 kopek, issued for Empress Anna in 1740, is overstruck on an earlier 5 kopek coin and estimated to sell for $250,000. 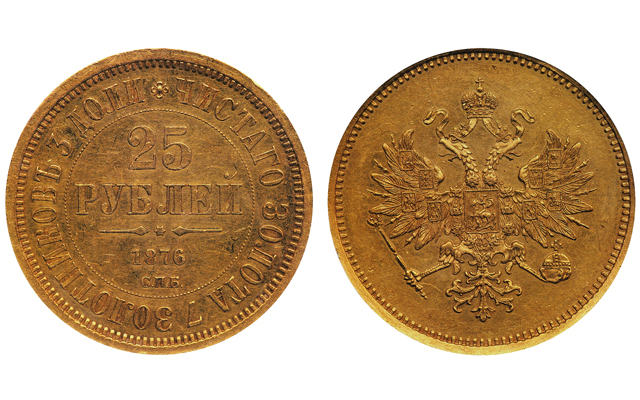 When Grand Duke Vladimir Alexandrovich reached his 30th birthday, his father gave him a gift like no other — a gold coin! The 1876 gold 25 ruble coin has a mintage of 100 pieces and is estimated to realize $200,000. 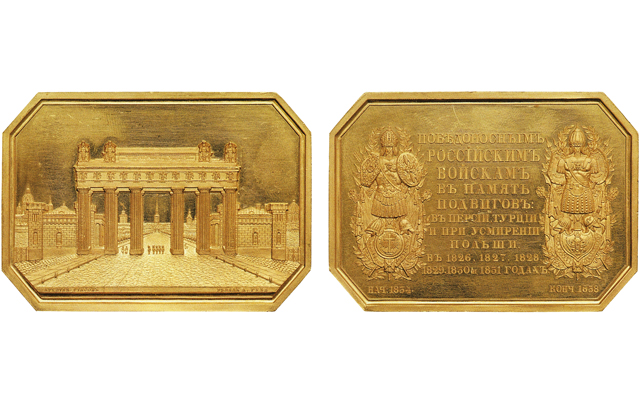 Russian highlights also include this 1838 plaque marking the opening of the Moscow Triumphal Arch in St. Petersburg, which is estimated to sell for $200,000.

The consortium known as The New York Sale grows in 2015 with the addition of Ira & Larry Goldberg Coins & Collectibles, but the specialty of the sales’ offering remains Russian at its core.

The joint sale has a long reputation for its offering of Russian numismatic material, and that continues with several highlights being offered in auction No. 36 on Jan. 8.

The three other firms composing the consortium are A.H. Baldwin & Sons Ltd., Dmitry Markov Coins & Medals and M&M Numismatics Ltd. The auctions are scheduled for Jan. 6 to 8 during the 43rd annual New York International Numismatic Convention.

The Jan. 8 auction is the third of three the firm will conduct at the show, and the Russian material highlights the sale’s offerings.

Leading the coin offerings is a 1740 bronze 2-kopek pattern, which is struck over a 5-kopek coin. The 1740 pattern was issued for Empress Anna, who appears on the obverse. The double eagle appears on the reverse.

A Very Fine example recently sold in a Swiss auction for approximately $120,000 U.S.

The example offered in the Jan. 8 auction is graded by Numismatic Guaranty Corp. as Mint State 62 Brown, and estimated to sell for $250,000.

With only 100 examples struck, the 1876 gold 25-ruble piece is one of the keystones of Russian gold coinage, the rarest of only four such sized coins.

Professional Coin Grading Service has designated this example as Proof 58. It is estimated to realize $200,000.

A third highlight of the Russian material is an 1838 gold plaque, octagonal in shape, made to celebrate the opening of the Moscow Triumphal Arch in St. Petersburg.

The arch was designed by Vasily Stasov in memory of Russia’s military victories, most notably in the Russo-Turkish War of 1828.

Though the plaque is also found in silver, the gold examples are extremely rare.

The auction consortium describes the plaque as Uncirculated, and suggests a presale estimate of $200,000.

For more information about all three sales catalogs being offered by the consortium, visit its website.