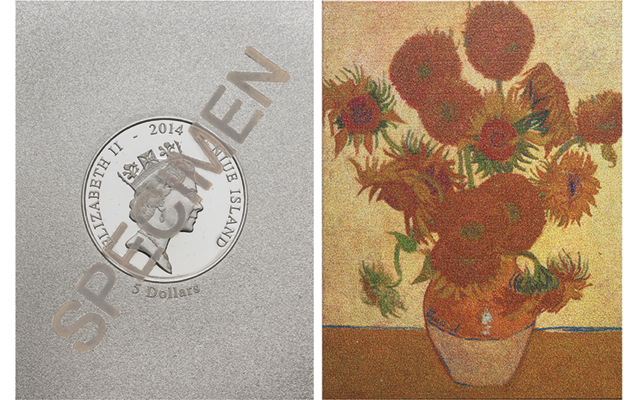 Vincent van Gogh’s 1888 Sunflowers painting is the subject of a new coin from Niue Island. The silver $5 coin kicks off a series issued through the East India Company. 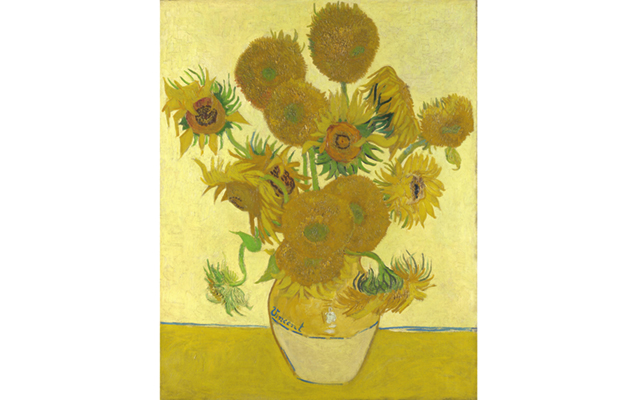 The actual 1888 painting by van Gogh was recently on exhibit at the National Gallery in London.

One of Vincent Van Gogh’s familiar Sunflowers paintings is the first design selected for a series of collector coins issued by the East India Company in cooperation with Britain’s National Gallery.

The first issue in the Precious Art Coin Collection was launched April 22, and according to EIC officials, nearly half of the 500 individual examples of the Prooflike 2014 .999 fine silver coins were sold at launch.

The reverse of the new coin shows the 1888 painting and commemorates its exhibition at the National Gallery along with an 1889 Sunflowers painting from the Van Gogh Museum in Amsterdam. That exhibit was open Jan. 25 through April 27, 2014.

In total, 500 coins were made available individually from a maximum mintage of 1,000 pieces. Plans for the balance of 500 coins have not been announced.

The Precious Art Coin Collection is an opportunity for admirers of fine works of art to invest in a unique limited edition coin featuring a National Gallery reproduction, according to the East India Company.

A second coin in the series is scheduled to be released in June, to show Hans Holbein the Younger’s The Ambassadors, a 1533 painting known for its significant symbolism of the time, as well as the anamorphic distortion of a skull.

The final coin in this year’s collection will launch in September to coincide with the National Gallery’s exhibition Rembrandt: The Finest Years, which opens Oct. 15 and continues through Jan. 18, 2015.

The obverses of the $5 coins, from Niue Island, carry the Raphael Maklouf effigy of Queen Elizabeth II.

The National Gallery collaborated with the East India Company to ensure the colors on the coin match the painting, the issuer said.

The coins are sandwiched in archival quality Perspex and housed in a wooden case with an individually numbered certificate of authenticity. The coins retail for £189.95, including value-added tax (about $319 U.S.).

The coins are on sale in London at the East India Company store and the National Gallery, or online at www.eicgold.com/preciousart.