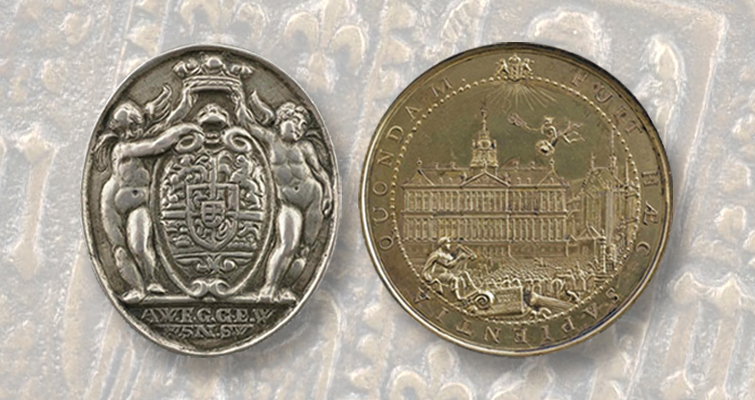 A new online resource from The Frick Collection helps collectors understand heraldry, as seen on the design of many medals.

Images courtesy of The Frick Collection.

The Frick Collection has a new online resource for those who are curious about the symbolism of heraldry, illustrated with medals from the Stephen K. and Janie Woo Scher collection of medals.

It is available at www.frick.org/scher_home.

An introduction by Stephen Scher explains, “Heraldry, the system by which coats of arms are designed and used, is a product of the Middle Ages, first appearing during the reign of Charlemagne (768–814 AD)”, adding that it was based on visual clues to help armor-wearing warriors identify one another quickly and accurately on the battlefield.

A glossary provides a full list of heraldic terms and literature on the complex field of heraldry can be found in an extensive bibliography.

The online supplement to recently published book, The Scher Collection of Commemorative Medals, lists those heraldic achievements, or coats of arms, that are found on the medals in the publication, and the numbers by which they are organized correspond to the catalog numbers.

A coat of arms is typically accompanied by a blazon, though Scher acknowledges, “To the uninitiated, the blazons in this supplement may appear somewhat opaque. A blazon describes a coat of arms in a precisely established order and in a language that, in English, derives from Old French. An equivalent vocabulary exists in all other languages in which heraldry is practiced.” These blazons help one visualize a coat of arms and allows a heraldic artist to depict the arms completely and accurately.

Although coats of arms bring to mind those with noble births and inherited titles, Scher explains, “Originally, titles and heraldic achievements were granted to worthy subjects by their lord, but eventually arms could be borne not only by individuals and families but by institutions, corporations, and clergy, as well as towns and cities.” Among the elements that can be found in a complete heraldic achievement and its blazon are: shield, partition, tinctures, ordinaries, subordinaries, charges, crest, helm, torse, mantle, crown, supporters, compartment, insignia, and motto. The colors and patterns used in blazons are referred to as tinctures.

An example of a classic Italian Renaissance medal is a bronze work of Amadio Amadei, called Amadio da Milano, depicting Niccolo III D’Este from around 1441 that has complex reverse design described as “Quarterly 1 & 4 Azure, three fleurs-de-lis Or a bordure indented gules and Or (Ferrara); 2 & 3 Azure, an eagle displayed argent armed and langued Or (d’Este).”

A more complex reading is seen on a small silver cast medal depicting Princess Hedwig of Denmark (1581 to 1641, Electress of Saxony 1602 to 1611), which includes symbols both recognizable, and obscure.

Those looking to test their ability to identify symbols of heraldry could find it on a silver gilt medal by Juriaen Pool I celebrating the inauguration of the New Town Hall, Amsterdam, dated 1659 that includes two lions holding three coats of arms each. The arms around the rim are those of the 36 Amsterdam city councillors as of 1659, each with distinct symbolism. 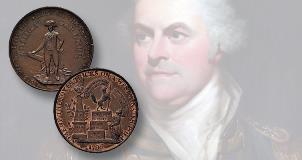 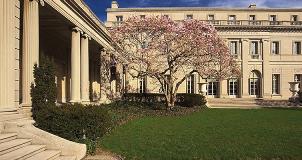 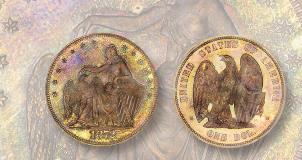